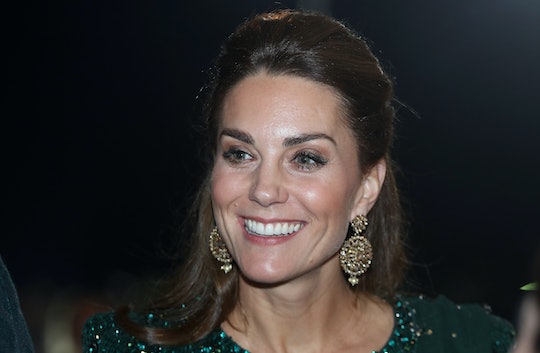 Prince Harry and Meghan Markle got a lot of props and publicity during their royal tour of South Africa last month, stopping at sites that were near and dear to Princess Diana's heart, like the former land mines of Angola. Well, now the other side of the family is honoring the "People's Princess," with Kate Middleton following in Princess Diana's footsteps on her royal tour in Pakistan.

Middleton and Prince William, aka the Duke and Duchess of Cambridge, touched down in Pakistan's remote Kush mountains as part of their tour of the country Tuesday, reflecting Diana's own trip to the region in 1991, according to the Daily Mail.

The couple's visit to the Kalash people in the Chitral region of Pakistan's Khyber-Pakhtunkhwa Province involved spending time with the same family who met with Princess Diana during her own trip, according to the Daily Mail. It was revealed that one of the family members was expecting at the time, and she named her daughter Diana. That same child grew up to have her own baby, who she named "William." Talk about everything coming full circle, right?

In fact, just thinking about how Kate and William got to return to same village where Diana once stepped and met with families gives me chills.

But wait — things got even more sentimental when William and Kate, arriving by helicopter, were gifted with traditional hats and white coats from the region, echoing a similar presents given to Diana in 1991, according to E! News. The pair also received a book featuring photos of Diana's visit, with Kate reportedly saying, "that's very special," as she looked at images of William's mom, the news channel added.

The trip of course was not just about William's past but about the couple's commitment to tour nations associated with the British Commonwealth, including Pakistan. Kensington Palace described the trip as “the most complex tour undertaken by the couple to date, given the logistical and security considerations" in the region, the Daily Telegraph noted.

The Duke and Duchess of Cambridge's commitment to combatting climate change was also reflected in the couple's choice to tour the retreating glaciers of the Khyber-Pakhtunkwa Province, as their joint Instagram shows.

As for the couple's littles? They understandably left Prince George, Princess Charlotte, and Prince Louis at home, the Daily Telegraph noted.

Interestingly enough, the Duke and Duchess of Cambridge aren't the only family members to have visited the region. Princess Charles and Duchess Camilla visited in 2006, while the Queen herself paying her respects to the nation in the late 1990s, according to the Daily Mail. But it was Diana who really connected with this land, returning to raise funds for a hospital, according to The Telegraph.

I think it's really cool how Kate Middleton and Prince William are drawing global attention to the region's unique needs, especially since the region has faced political unrest and is currently battling the effects of global warming. And it's nice to see another side to the country, with its beautiful traditions and rich history.

Although I'm not sure what the couple is up to next, I can't wait to see the other ways in which Middleton will honor the legacy of her impressive mother-in-law, Princess Diana.