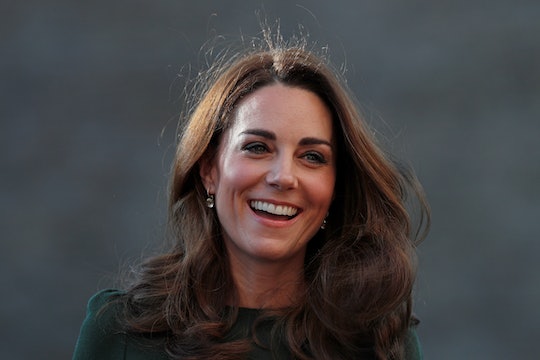 Kate Middleton Gets Candid About This All-To-Relatable Motherhood Struggle

Whenever the royal family is out in public, the whole family looks extremely put together, from oldest to youngest. It may be easy to believe, then, that royal family members like Kate Middleton don't have any parenting struggles at all. But, in a recent interview, Kate Middleton got candid about motherhood and a struggle every mom can relate to. If you're a parent who sometimes has bad days and feels overwhelmed, don't fret — royal moms have them, too.

Any parent can attest that having one toddler can be a real challenge. Now imagine having three kids 5 and under... that can definitely be exhausting. Although Middleton and Prince William do have the help of their nanny, Maria Teresa, according to PopSugar, and certainly many royal resources, that doesn't make all of the struggles go away.

Recently, Middleton visited the Family Action Charity, where she launched a new national helpline called FamilyLine, as reported by E! News. The volunteer run helpline is meant to help families talk about challenges they face. That includes helping families dealing with debt, addiction, or any relationship and mental health issues, as reported by Hola!

While meeting with volunteers, Middleton opened up about some of her own experiences as a mother to three young kids.

"Everybody experiences the same struggle," Middleton said, according to Daily Mail. A lot parents, for example, are familiar with how eager people may be to help with a new baby but, as kids grow, that help can go away.

Middleton opened up about sometimes feeling isolated herself, saying, according to the Daily Mail, "It's so hard... You get a lot of support with the baby years... particularly in the early days up to the age of about one, but after that there isn't a huge amount — lots of books to read."

One volunteer had nice words to share about Middleton's recent outing. "Why she's a great supporter of our service is that she does recognize that families have the same pressures and struggles and she's no exception," they said, according to E! News. "She may have slightly different circumstances to the rest of us but, you know, being a parent is being a parent."

Middleton also took the time to listen to young people in the community. After one student shared how she cares for her mother, Middleton said, according to Hola!: "Honestly, I don't know how you do it. The challenges and the pressure of school is big enough itself and then to have to go back home and take extra care of her."

The helpline is now running as a nationwide service after being piloted for 12 months, according to The Telegraph. The outlet noted that the service aims to provide both immediate and long-term support to families, including practical information and guidance.

FamilyLine is clearly an important service, so it's awesome to see Middleton supporting it. And although parenting and all of its struggles can be hard, it can definitely help families feel better to know they aren't completely alone and get the support they deserve.