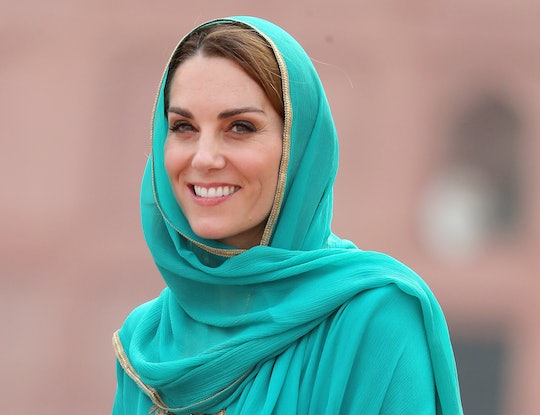 People are used to seeing Prince William and his wife, Kate Middleton, embark on royal tours and attend royal engagements. But people almost never see the couple (especially Middleton) speak to TV reporters. That changed on Thursday, when Kate Middleton gave a rare interview after visiting a children's village in Pakistan, and that is so awesome for one reason — it's been eight years since the last time she did this.

Middleton and Prince William just spent five days in Pakistan, where they met with different people, and worked hard to showcase Pakistan as a "dynamic, aspirational, and forward-looking nation," according to People. This meant they got to visit different cities, take part in the culture, and (of course) visit charities. On Thursday, Oct. 17, Middleton and Prince William visited SOS Children's Village, an orphanage in Lahore, Pakistan, where they met with a number of people, according to Entertainment Tonight. But this trip was special for another reason — Middleton gave her first television interview in eight years while at the children's village, according to Cosmopolitan.

Middleton spoke with CNN, where she talked about the importance of visiting the orphanage. "There's so many vulnerable women here but they've really used their positivity and the support that the village here provides them, really to support and protect the next generation of children in their care and give them the best possible support to their future lives," she said.

Watching a clip from this interview is just a little surreal. It serves as a reminder to the fact that people haven't actually heard Middleton speak on TV in years. Hearing that voice come out of her is a little shocking.

Middleton also spoke very highly about their entire visit to Pakistan in the interview. "It's been fantastic, we've seen a lot of Pakistan, the huge variety," she said. "It was amazing seeing some of the geography yesterday, but then to see some of the community activities has been really special."

In the clip, Middleton is so composed, well spoken, and has some interesting things to say. After watching this video, some people might wonder — why doesn't Middleton do more recorded interviews?

As it turns out, that might be a personal choice, according to Vogue, and not one dictated by the team of people behind her. Middleton reportedly has a fear of public speaking, according to the Daily Beast. This was confirmed when she reportedly told an attendee at her first public speech in 2012 that she finds "doing speeches nerve-wracking", according to The Guardian.

Since this is the case, it's easy to see why she doesn't give televised interviews as much as her husband does — and that is totally OK.

But Middleton sounded just a bit differently during her last TV interview. Needless to say, a lot has changed in her life (and the world) since the last time she talked in front of televised cameras. Middleton and Prince William sat down in front of reporter shortly after getting engaged in November 2010 to talk about their relationship, their upcoming royal wedding, and Middleton's feelings about joining the royal family. She was a little nervous about her life ahead of her, to say the least. She was 28 years old at the time of the interview, and had little clue as to what the future might hold for her, according to Harper's Bazaar. But she was relying on her future husband to show her the way.

"It's obviously nerve wracking, because I don't know what I'm sort of — I don't know the ropes," she said in the interview at the time, according to ABC News. "William is obviously used to it but no — I'm willing to learn quickly and work hard."

You can really hear the nerves in Middleton's voice while watching some of that first televised interview. But she's done so much growing and been through so many changes in her life since then — she's had three kids, has gone to dozens of royal engagements throughout the years, and has given enough speeches to combat any bout of stage fright. Hopefully she won't wait as long to give her next televised interview — whenever that may be.