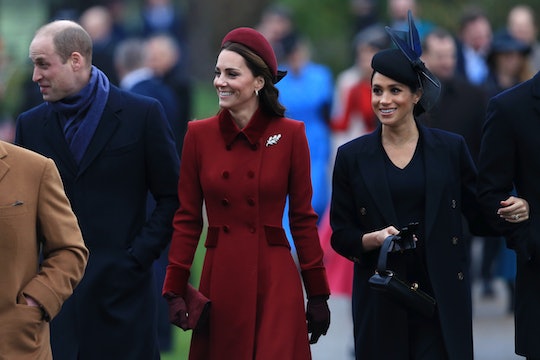 The United Kingdom's royal family had a lot to celebrate this year. Between births, weddings, and pregnancy announcements, the good news kept on coming from them. So, it would make sense that the family members would be so overjoyed on Christmas Day. It's so delightful to see Kate Middleton and Meghan Markle looking so happy (and like the epitome of Christmas cheer) during their Christmas morning appearance on Tuesday.

On Christmas morning, Markle and her husband, Prince Harry, took part in the royal family's annual walk to church services at St. Mary Magdalene Church in Sandringham, according to People. This was incredibly exciting, since royal watchers got to see another glimpse of her pregnancy bump. However, there was something even more exciting than seeing Markle's bump. People were delighted to see Markle and Kate Middleton looking so incredibly happy together during their walk to church. Cue the happy tears.

Middleton and Markle reportedly "chatted happily" together as they made their walk to church, showing off their gorgeous coats and matching hats — Middleton opted for red while Markle looked so stunning in navy blue. Their looks are so pretty and absolutely fitting for the cold English weather. Seriously, their happiness is so contagious. By looking at these photos, it's impossible to not have a smile on your face.

In fact, the two sisters-in-law looked "extremely close" on Christmas Day during their walk as they laughed with and talked with other members of the royal family, according to Harper's Bazaar.

For royal watchers and fans of both duchesses, seeing them together might be the best Christmas gift of all.

And no one would have guessed that there was any alleged bad blood between the two after their royal appearance Tuesday. During the appearance, Markle only had a smile on her face, shaking hands with well wishers, accepting flowers, and chatting with them on after church, according to Mirror.

Unfortunately, the smallest royals — Prince William and Middleton's children, Prince George, Princess Charlotte, and Prince Louis — had to stay at home, according to People. But Middleton and Markle's happy appearance at church this morning definitely made up for this.

Through the many changes I have seen over the years, faith, family, and friendship have not only ben a constant for me, but a source of personal comfort and reassurance. Even with the most deeply held differences, treating the other person with respect and as a fellow human being is always a good first step towards greater understanding.

"I believe [Jesus'] message of peace on earth and goodwill to all is never out of date," the Queen added. "It can be heeded by everyone — it's needed as much as ever."

She is so right. This is a message that can be heeded by everyone, even the members of the royal family. Family is the reason for this season. No matter what reported differences family members may have with each other, it's important to come together for the holidays, just as Markle and Middleton did on Tuesday.