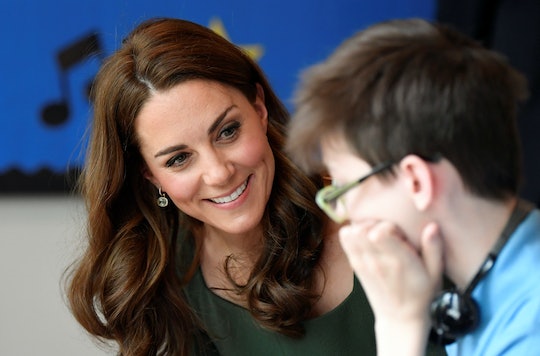 The Duchess of Cambridge is a longtime supporter of accessible mental health services, especially where it concerns parents and their children. Case in point: On Wednesday, Kate Middleton opened a children's mental health support center in London named the Kantor Centre of Excellence.

Not many people might know this, but Middleton's brother, James Middleton, openly suffered from depression. James opened up about this issue in an op-ed for the Daily Mail, stating in January: "I feel I have a duty to speak out, so I can help others who are suffering as I did."

Similarly to James, the Duchess of Cambridge wants to use her platform for her good, and she has helped countless families achieve better mental health throughout the years.

Most recently, Middleton traveled to the Anna Freud National Centre for Children and Families in London to open the Kantor Centre of Excellence, while also paying a visit to the Pears Family School.

"The Duchess of Cambridge, Patron of @AFNCCF, officially opens the Kantor Centre of Excellence in London," Kensington Palace captioned a video of Middleton visiting the space. "The new centre brings leading practitioners, researchers and young people together for the first time, to improve mental health services for children and families."

In between visiting with kids and stakeholders, Middleton reportedly delivered a speech to mark the center's opening, in which she said that mental health is something she's quite passionate about, according to POPSUGAR.

"I have learnt so much about early childhood development and the importance of support for parents through your work here at the Anna Freud Centre," she said, according to The Sun. "This is something I really do care about."

She added: "The ambition for the new Kantor Centre of Excellence is hugely inspiring. The bringing together of research, education, practice and policy, all in one place, will take Anna Freud Centre’s mission to the next level. It is testament to what can be achieved when people work together to realize a shared vision."

As for the Pears Family School, it's a "therapeutic Alternative Provision (AP) school specializing in providing short-term placements for students with complex needs," according to the center's website.

What's special about the school is that it "requires a parent or significant adult family member to participate in the classroom with their child," with the hope that the child can one day return to the general classroom as "functional learners."

Middleton's support of these institutions is proof that she's committed to furthering mental health initiatives in England.

The Duchess of Cambridge has also worked to alleviate the stigma attached to mental health, stating in a 2016 guest column for HuffPost: "For too long we have been embarrassed to admit when our children need emotional or psychiatric help, worried that the stigma associated with these problems would be detrimental to their futures.”

Clearly, mental health is an important cause for Middleton. And I suspect she'll continue to invest her time, funds, and energy in innovative centers that share her vision. Bravo.