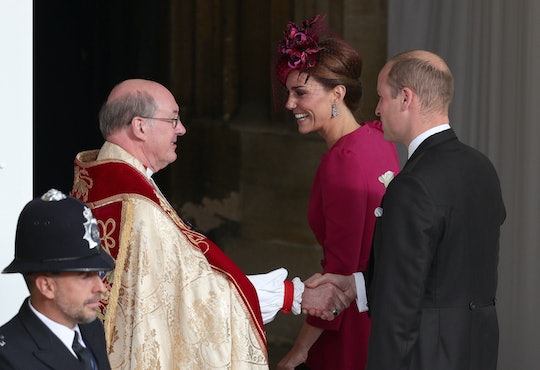 It might have been Princess Eugenie's big day, but her cousin, Prince William, and his wife, Kate Middleton, totally stole the show for a brief moment inside St. George's Chapel. As the last of the high profile guests were arriving, Kate Middleton and Prince William broke royal protocol by holding hands as they waited for the ceremony to start.

Now, a married couple holding hands at a wedding may not seem like the biggest deal, especially to the non-British viewers. But it's usually quite rare for royal couples to hold hands at public events, as reported by Town & Country magazine. Thankfully, the Duke and Duchess of Cambridge aren't really concerned about what others think of their PDA!

So now you might be wondering, what exactly is the royal etiquette when it comes to hand holding — or just PDA in general? According to body language expert Robin Kermode, the unofficial etiquette is to just follow Queen Elizabeth's lead, as the Daily Mail has reported. After reading that, one quick Google search will reveal that Queen Elizabeth and her husband, Prince Philip are, in fact, rarely seen holding hands. Most pictures show Prince Philip taking the Queen's hand in a more escort-like fashion, either assisting her up and down a flight or stairs, or in and out of event, etc.

Of course the world was watching Princess Eugenie's wedding, so it's not surprising that social media was flush with overly excited reactions to the stolen moment between Kate and Will. Many royal watchers were even clever enough to take some screen grabs of the PDA, sharing them on Twitter for those who might have missed it.

As you can see, Duchess Kate's hand was rested on Prince William's thigh. Prince William then wrapped his own hand around Kate's, locking their subtle embrace in the moments before Princess Eugenie walked down the aisle on Friday, Oct. 12.

But, unlike Queen Elizabeth and Prince Philip, the Duke and Duchess of Cambridge have stolen quite a few moments over the years since their April 29, 2011 wedding. It was only a few short months ago in April 2018 when Kate and William held each other's hands as they left the Lindo Wing of St. Mary's Palace with their newborn, Prince Louis, as Harper's Bazaar reported.

Even though there aren't any real rules about hand holding, it seems that showing a little bit of PDA is all about the time and the place. For example, Kate and William might not want to hold hands while working with one of their many charitable organizations for a royal appearance. But, holding hands just hours after welcoming their third child, or while sitting in the royal seats at a wedding, one could definitely expect to see a couple holding onto each other tightly.

While everyone is following the Queen's lead when it comes to royal protocol and etiquette, with or without official rules, Prince William set a good example for his younger brother, Prince Harry. The newlywed royal and his wife, Meghan Markle, are almost always holding hands when out in public, so long as it's appropriate. Hey, a little PDA never hurt anyone, right?