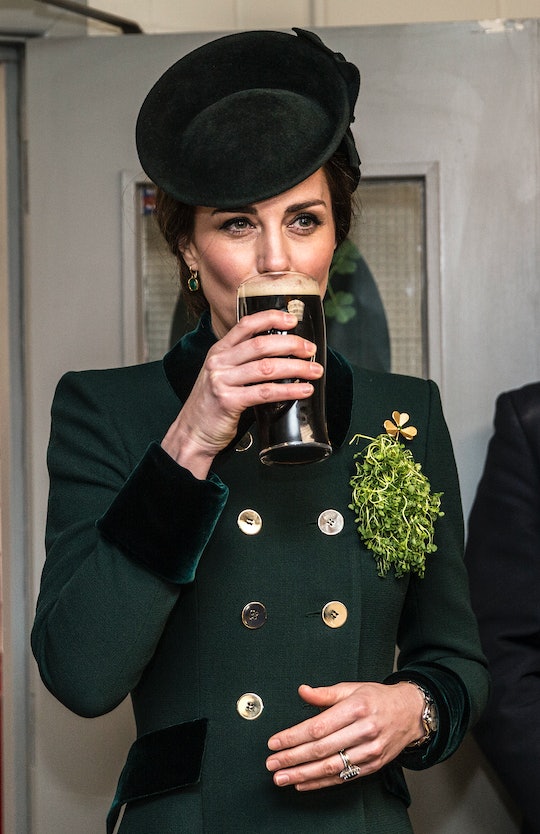 Sounds Like Kate Middleton Had A Moms' Night Out At A Chill Pub & Yes, I'm Jealous

Most moms — yep, even the royals one — would appreciate a night out on the town, perhaps with a frosty pint, a little dancing, and a good ol' vent sesh. So when I heard that Kate Middleton had a moms' night out recently, I, a mom myself, was delighted to hear she got to kick back with some pals. Along with raising Prince George, Princess Charlotte, and Prince Louis, Middleton spends her days championing important causes and engaging in a rigorous social calendar that can't leave much room for "me time." So I'd say that a child-free night of socializing with other moms was much appreciated.

Despite her royal status, Middleton is often lauded for being a duchess of the people. True to form, when there was a Thomas's Battersea moms social — complete with adult beverages, I might add — last month, the proud mom was apparently so there. The event was held at the Hollywood Arms, a "low-key" pub in Chelsea, England last month for the "school-run mums," according to the Daily Mail. Designed as a meet-and-greet for moms new to the school, the intimate gathering was held in a private room at the pub called the Boulevard Bar that holds roughly 80 people, the Daily Mail reported.

Keeping her appearance low-key, Middleton was reportedly able to come and go from the event without catching the ever pervasive eye of the British media due to a special entrance to the building through a back alley, Harper's Bazaar reported, adding that she attended the social with just one bodyguard, blending in very well.

Rumor has it that Middleton wasn't the first royal to have used this secret entrance. The Hollywood Arms was one of Prince Harry's favorite spots on the town in his younger days, according to Glamour, so there's a chance that the door was installed for him to use during his comings and goings without being seen. How cool is that?

But how Middleton managed to fit such a laid back evening in her schedule is beyond me. Back in 2017, Write Royalty reported that in the first three months of the year alone, the duchess undertook 26 work engagements. There were a total of 64 working days in those months, not including weekends and holidays, meaning that Middleton worked every 2.5 working days during that time. That's on top of raising the two kids that she had then. Considering she has stayed pretty busy in the past two years, not to mention had another baby, I highly doubt that things have slowed down for her lately.

While a school function at a pub is far from the Sex in the City level nights of revelry that many of my friends have suggested for me postpartum, I'd take it. Like the majority of moms out there, I have very little time to myself and I'd wager that Middleton is no exception. In fact, according to the New York Post, a 2018 survey found that moms only get about 30 minutes of "me time" per day. Additionally, the survey found that 32% of parents work until 8 p.m. on a given day, making those few precious moments feel all the more fleeting. Those numbers didn't include a "moms of royalty" category, but you catch my drift.

Chances to step away from those sweet littles and connect with other moms can be a crucial part of surviving this wild ride known as motherhood. Kudos to Middleton for making the time for herself and enjoying a night with her peers. May we all follow her lead.