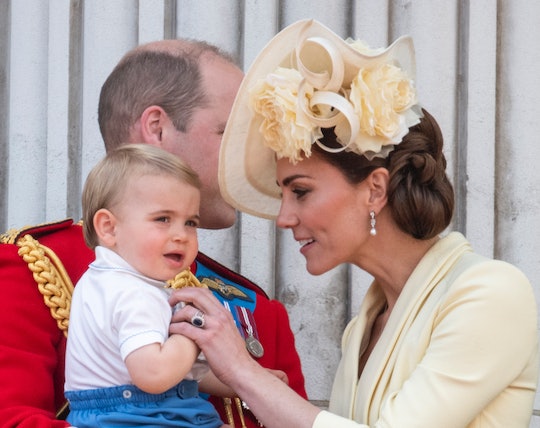 Everyone Knows The Words To One Of Prince Louis' Favorite Songs

Although not yet 2 years old, Prince Louis is reportedly becoming something of a music connoisseur. While hosting a reception at Buckingham Palace, Kate Middleton recently revealed Prince Louis' favorite song and you definitely know the words to it.

After a busy weekend of royal duties, the Duchess of Cambridge threw a reception to honor the 25th anniversary of Place2Be, the United Kingdom's leading provider of school-based youth mental and emotional health services, at Buckingham Palace on Monday evening. While speaking with a group of school children slated to perform in choirs later in the reception, Middleton reportedly learned two children were also celebrating birthdays that day.

That's when Middleton, according to People, revealed she's well versed in the art of singing, "Happy Birthday." However, it seems that Middleton's repeated singing of "Happy Birthday" doesn't stem from an abundance of birthday celebrations. Rather, she told the children that "Happy Birthday" was currently "one of Louis' favorite songs."

While perhaps an unconventional choice of favorite song, I can see the appeal behind "Happy Birthday." Not only is it simple and easy to remember, but it's also a song that celebrates whomever it's being sung to — in this case, Prince Louis — and who doesn't love being hyped up by their friends and family?

But Prince Louis' love of "Happy Birthday" may not be all that unique. In fact, it seems as if "Happy Birthday" was created specifically with children in mind. According to Reader's Digest, "Happy Birthday" was first composed by kindergarten teacher Patty Smith Hill and pianist Mildred Jane Hill in 1893. While the original lyrics and title of the song were different — it originally centered around wishing a good morning, rather than a happy birthday — the melody has always been the same. And it's a melody the Hill sisters wrote to appeal specifically to young children with simple, easy lyrics that even the youngest of kids would learn and perform.

Of course, it's not altogether surprising to hear that Prince Louis enjoys music. The Mail on Sunday has previously reported that Middleton attends a weekly Monkey Music class with the royal toddler. The class centers around children and parents dancing, singing, and making music together as a group, according to The Mail on Sunday.

While it seems that mom-of-three Middleton is more than happy to indulge Prince Louis in a chorus of "Happy Birthday" whenever the mood strikes, the young prince will likely hear an extra special rendition of the song when he turns 2 next month.