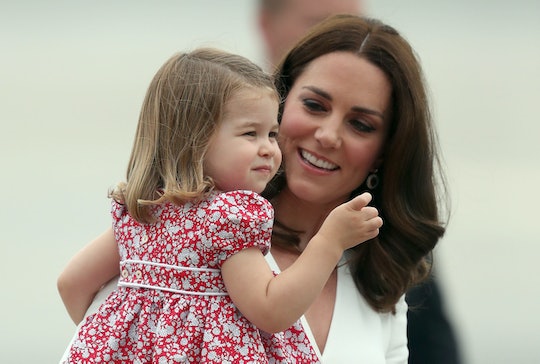 Like many parents, the Duchess of Cambridge treasures the pictures she snaps of her children. But in a rare personal interview with Happy Mum, Happy Baby podcast host Giovanna Fletcher, Kate Middleton recently revealed why one Princess Charlotte photo was so special to her.

In the photo, which Middleton later shared on Instagram, Princess Charlotte is crouching down in a field to smell a flower. While some may see the moment captured as insignificant, Middleton said it represents how, every day, she tries to give all of her children moments free of the complications, distractions, and pressures that crowd their busy royal life.

Middleton went on to explain that she tried to provide similar moments for her own children, 6-year-old Prince George, 4-year-old Princess Charlotte, and 1-year-old Prince Louis. "That's really what I try and do with my children as well because it totally strips away all the complications, all the pressures as a parent. I think those experiences as well mean so much to children and the world that they're in, which is a real adventure really for them at that age."

Later in the interview, Middleton discussed how important she felt spending time in the outdoors was to cultivating not only those simple moments, but quality relationships as well. "As children we spend an awful lot of time outside and it's something I'm really passionate about," she said, adding that she thought time outdoors was great for one's mental and physical health. "It's such a great environment to actually spend time building those quality relationships without the distractions of 'I've got to cook' and 'I've got to do this.' And actually, it's so simple."

Case in point, the photograph of Princess Charlotte stopping to smell a flower. "I’ve got this one photo of Charlotte smelling a bluebell, and it, really for me, it's moments like that mean so much to me as a parent," Middleton told Fletcher. "I try every day to put moments like that in, even if they're small or even if I don't have time."

Although never seen by the public before, the photograph appears to have been part of a series of pictures Middleton snapped in April 2019 to mark Princess Charlotte's fourth birthday.