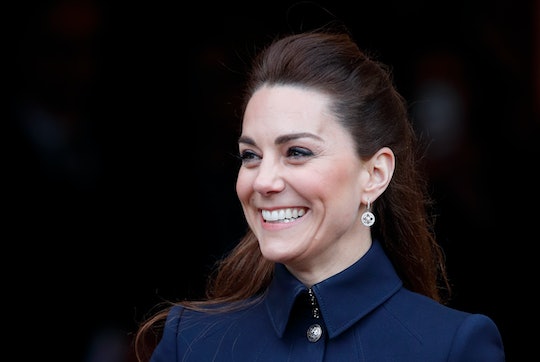 Kate Middleton Finally Opened Up About Her Experiences With Hypnobirthing

The Duchess of Cambridge has opened up about pregnancy and motherhood, including the mindfulness and meditation techniques she's used. In an interview with Happy Mum, Happy Baby podcast host Giovanna Fletcher, Kate Middleton shared how hypnobirthing helped alleviate hyperemesis gravidarum, a severe form of morning sickness that can cause nausea, vomiting, weight loss, and dehydration.

"It was through hyperemesis that I really realized the power of the mind over the body because I really had to try everything," Middleton told Fletcher when asked if reports she had used hypnobirthing were true. "I saw the power of it really, the meditation and the deep breathing and things like that, that they teach you in hypnobirthing, when I was really sick. And actually I realized that this was something I could take control of, I suppose, during labor. It was hugely powerful."

As explained by the Mayo Clinic, hypnobirthing is a technique of self-hypnosis and relaxation geared at reducing fear, anxiety, and pain through a combination of breathing, meditation, visualization, positive thinking, and sometimes music. Speaking with Fletcher over the weekend, Middleton admitted that there were various "levels" to hypnobirthing, including some that might be seen as more new age.

"I'm not going to say that William was standing there sort of chanting sweet nothings at me," Middleton said. "He definitely wasn't! I didn't even ask him about it, but it was just something I wanted to do for myself."

Reports that Middleton was using hypnotherapy to combat her severe morning sickness first surfaced in 2013. In an interview with Australian magazine New Idea, a childhood friend claimed the Duchess of Cambridge was trying the therapy to overcome the nausea and anxiety hyperemesis gravidarum caused her to feel about food. "Kate still looks at food and feels nauseous," Marie Claire reported Middleton's friend told New Idea. "The hypnotherapy is taking away any negative thoughts connected with food from the morning sickness, and replacing them with cravings for healthy, nutritious food."

Because of her hyperemesis gravidarum, Middleton told Fletcher she wasn't "the happiest of pregnant people." And although Middleton was the one actually experiencing symptoms of hyperemesis gravidarum, her severe sickness left those close to her feeling poorly too. "You know, William didn't feel he could do much to help and it's hard for everyone to see you suffering without actually being able to do anything about it."

In fact, Middleton revealed that because of her difficult pregnancies, she'd actually quite enjoyed labor. "Actually because it had been so bad during pregnancy, I actually really quite liked labor," she said. "It was an event that I knew there was going to be an ending to."