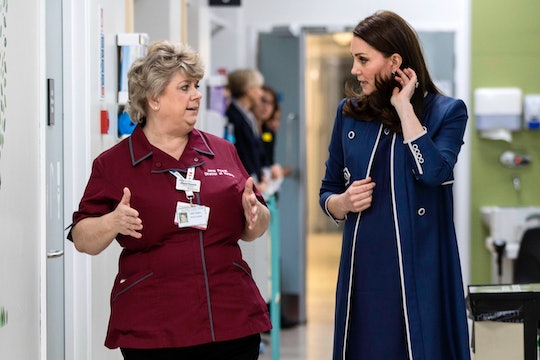 It's no secret that the Duchess of Cambridge is passionate about being an advocate for children and their well-being. But while her focus has often been on children's mental health, she has recently turned her attention to the earliest days of life. Ahead of the new year, Kate Middleton thanked midwives for their selfless service after a secret visit to a hospital in London, shortly before the beginning of the International Year of the Nurse and Midwife.

Last month, Middleton spent two days volunteering in the maternity unit of Kingston Hospital in England, People reported, and the experience touched her deeply. The visit was a part of the duchess' involvement in the Early Years project, a charitable effort that highlights the lasting impact of the experiences between birth and year five.

Kensington Palace released photos on Friday that showed Middleton at the hospital, as well as a letter that she wrote to the midwives that she worked alongside. In the letter, she detailed the impact that their work had on her and the families that they served. "Although this was not my first encounter with the care and kindness provided by midwives across the country, it gave me a broader insight into the true impact you have on everybody you help," she wrote.

Middleton went on in her letter to say that the work that nurses and midwives do to support the “critical phase of development” of children and moms “extends far beyond the complicated task of delivering a baby successfully. The help and reassurance you provide for parents-to-be and parents of newborns is just as crucial.”

The early years of life are "more critical for future health and happiness than any other moment in our lifetime," she wrote. "Even before we are born, our mother’s emotional and physical health directly influences our development and by the age of 5 a child’s brain has developed to 90 percent of its adult size. Your role at the very start of this period is therefore of fundamental importance.”

Along with praising the nurses and midwives of the hospital, Middleton also explained what her time volunteering was like. She accompanied community midwives on their daily rounds, even visiting patients in their homes and connecting with them deeply. "I was truly touched by the trust that people placed in me, sharing their experiences and voicing their fears openly," she wrote. "I also spent time in hospital clinics and on post-natal wards. No matter the setting, I was continually struck by the compassion that those of you I spent time with showed, and the incredible work ethic you demonstrated on behalf of your entire profession — not only performing your rounds but working tirelessly through the night to support people that were at their most vulnerable."

Despite the impact of her time spent volunteering, Middleton is far from finished. She has made the Early Years project the focus of her charitable efforts, working with a varied group of medical professionals to make lasting changes in the world of early medical care. The results of this work have yet to be announced, but will go into effect in coming months.

This works is timed to coincide with the International Year of the Nurse and Midwife, a worldwide push by the World Health Organization, the International Confederation of Midwives (ICM), International Council of Nurses (ICN), Nursing Now and the United Nations Population Fund (UNFPA). The organizations' 2020 goal is to celebrate the work done by nurses and midwives, as well as to highlight the challenging conditions they often face and advocate for increased investments in these departments.

Middleton's work brings to light the importance of such efforts and the focus that will be paid to them in the coming year.