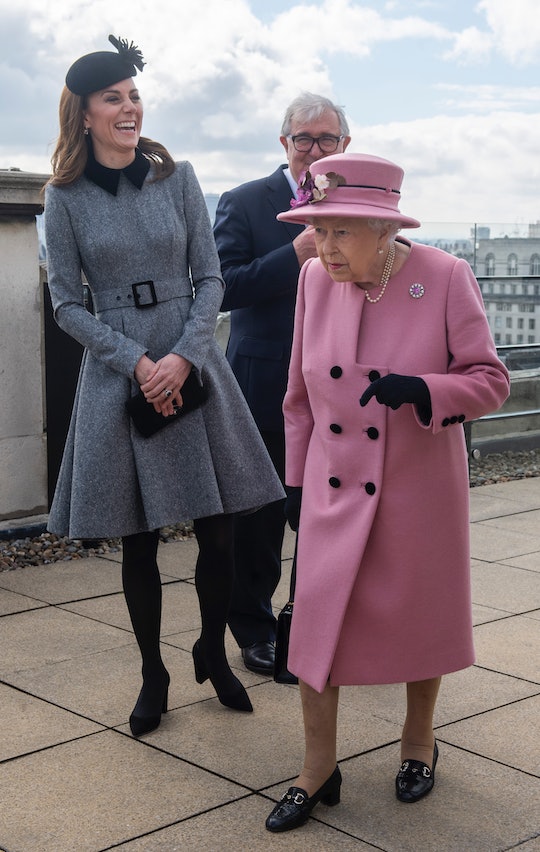 Queen Elizabeth and the Duchess of Cambridge enjoyed their first-ever solo outing together on Tuesday, a momentous occasion that was chock-full of adorable moments. One sweet example from the day? Kate Middleton and the Queen shared a blanket on the car ride over to the event, which is the definition of #RoyalBFFGoals.

Some people might be surprised to learn that up until Tuesday, Middleton and the Queen had never attended a public event together. Of course, this probably wasn't as a snub to the Duchess of Cambridge — it's just not typical for the Queen to hang out with her in-laws solo, according to Yahoo! Lifestyle. But for some reason or another, the Queen decided to invite Middleton along to Tuesday's event at King's College in London, England, according to E! News. The Queen was there to open the Bush House, the "new teaching-and-research center spread out over five iconic buildings on the Strand campus in central London not far from the Thames," according to USA TODAY.

The pair also toured the high-tech college together, and while there, they viewed a robotics demonstration. An amused Middleton reportedly referred to one of the students' real-life robots as "strange," while the Queen supposedly looked "slightly alarmed" when one of the robots inched near her, according to People.

All in all, it sounds like the two had a great time together. But the real bonding, however, seemingly took place before the two ever stepped foot onto the campus. Case in point: On the ride to the event, the royals were photographed sharing a blue blanket. Talk about a cozy moment!

Many fans couldn't help but gush about the sweet pictures, with one person writing on Twitter: "The Queen & future Queen are sharing a blanket is the cutest thing ever."

Someone else said: "The Queen and The Duchess of Cambridge sharing a blanket, I don’t know why I love this so much but I do."

"The queen sharing her blanket with Kate was so cute I'm sure my own grandma would've done that to me," another person commented.

Speaking of the blue blanket, it looks like it's one of the Queen's most beloved possessions. The royal was photographed with a blue blanket five times in recent years, according to Marie Claire. Considering the blanket reportedly costs $225, it's good to know the Queen is getting some mileage out of the comforting accessory.

Although the Queen sharing her chic blue blanket with Middleton might be surprising to some, it shouldn't shock those who've followed the royals' sweet relationship throughout the years. Middleton touched on their strong bong in a 2016 documentary about the Queen, revealing that their friendship deepened due to a thoughtful Christmas present.

"I was worried what to give the Queen as her Christmas present. I was thinking, 'Gosh, what should I give her?' I thought back to what would I give my own grandparents," she recalled, according to Harper's Bazaar. And I thought, 'I’ll make her something.' Which could have gone horribly wrong. But I decided to make my granny’s recipe of chutney."

Middleton continued, "I was slightly worried about it, but I noticed the next day that it was on the table. I think such a simple gesture went such a long way for me and I’ve noticed since she’s done that on lots of occasions and I think it just shows her thoughtfulness, really, and her care in looking after everybody."

From homemade chutney to sharing blankets, it's clear Middleton and the Queen are royal BFFs. How sweet.