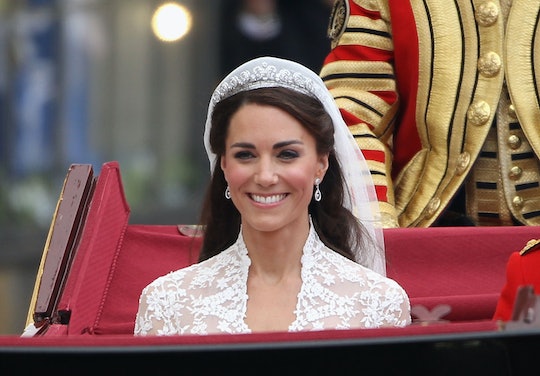 When word got out that Prince William would be marrying a non-royal, the little girl inside of me was shamelessly enamored with the real life fairytale unfolding in front of me. She represented what so many girls always dreamt of and she has since been living the dream. Recently, Kate Middleton told a little girl what she likes about being a "princess" and the video is proof that the Duchess of Cambridge is the Disney dream the world so desperately needs.

According to Glamour, while visiting Northern Ireland on official palace business, Middleton paused to speak with a little girl who was as wrapped up in the princess narrative as I am. And, lucky for you, the whole interaction was captured on video by a journalist who was there when it all went down.

Valentine Low, the reporter who videotaped Middleton's exchange with the little girl, shared the experience on Twitter. Middleton learned that her new little friend — whose name is Hannah Ritchie — was working on a school project about the royal family. Ever the giving soul, Middleton answered a few questions to help with the project, as Glamour reported. The video shows the duchess telling Hannah that her favorite part of being a "princess" is "meeting special kiddies."

"I meet lots of different people, it's really great," she tells her. "I love working with young people. Everyone's so brave and strong in some of the places we go meet."

After providing some great material for Hannah's report, Middleton said, "It's very nice to meet you. Good luck with your biography." As if she needs luck with sources like that!

Middleton's decision to help a little girl with her homework is hardly surprising. Along with being a very involved parent to her own three children, the Duchess of Cambridge has made it her life's work to serve children everywhere.

In September of last year, for instance, Middleton launched her first solo charity campaign, as Hello! Magazine reported. According to the Daily Mail, the campaign focused on child welfare, bringing a range of experts together to address issues like anti-social behavior, addiction, and mental health. And during a visit to the Reach Academy in London last year, Middleton talked about why the cause of child welfare matters so much to her

"We all know how important childhood is, and how the early years shape us for life. We also know how negative the downstream impact can be, if problems emerging at the youngest age are overlooked, or ignored," she said, according to Hello! Magazine. "It is therefore vital that we nurture children through this critical, early period."

She went on to explain how her campaign would help bridge this gap in nurturing, according to the Daily Mail:

At what stage in a child’s development could we, or should we, intervene, to break the inter-generational cycle of disadvantage? The more I have heard, the more I am convinced that the answer has to be early — and the earlier, the better. Addressing the issues only when they root, later in life, results in huge detriment: detriment to the healthcare, education and social support system in our country.

Whether she's tackling large scale issues like addiction and child mental health struggles, or taking time out of her day to answer the public's most pressing questions — like the best part of being a "princess" — Middleton is clearly a woman of the people, especially the little people. With her compassion and commitment to serve the underserved children, it's easy to find nice things to say about *Princess Kate*. I don't know if Hannah's report on Middleton and the rest of the royals will be made public any time soon, but I sure would love to read it.