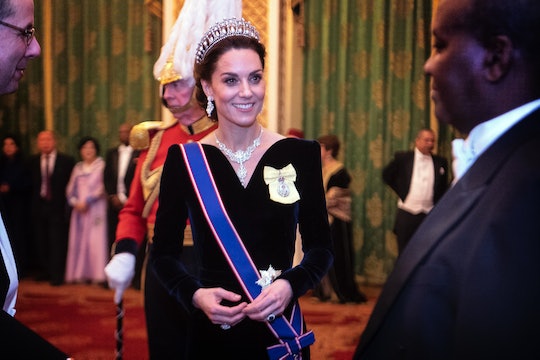 Although Princess Diana died long before either of her sons met their wives, Meghan Markle and Kate Middleton often find ways to honor their late mother-in-law. Whether it's through fashion, accessories, or even an old photo of Lady Diana and the young princes on Mother's Day, the "People's Princess" has not been forgotten. Case in point: Kate Middleton wore Princess Diana's tiara to a recent event, and she looked absolutely stunning.

On Wednesday, Dec. 11, Middleton attended the annual Diplomatic Reception held by Queen Elizabeth at Buckingham Palace, according to ABC News. The Duchess of Cambridge opted to wear one of Princess Diana's beloved tiaras at the event, according to People. It's called the Cambridge Lover's Knot Tiara, and it's the same headpiece Princess Diana wore so many times during her marriage to Prince Charles.

Photos from the event were shared to Kensington Palace's social media channels, and it's safe to say fans of the royals were thrilled to see Kate wearing this particular tiara at the event for the second year in a row. One Instagram user commented, "What a beautiful couple! I was so glad to see Catherine wear the lovers knot tiara again. It’s my favorite. She looks quite regal!!!"

Another person wrote, "Tiara moments," alongside a heart-eyed emoji.

Another person declared, "That tiara is meant for her head."

Although people commonly refer to the gorgeous headpiece as "Diana's tiara" — because it was one of her favorites — it technically belongs to Queen Elizabeth (when she and Prince Charles divorced, she gave it back to the Queen). It was created in 1914 for Queen Mary by the House of Garrard from pearls and diamonds already owned by her family, according to Town & Country. The Cambridge Lover's Knot Tiara is actually replica of one owned by Queen Mary’s grandmother, Princess Augusta of Hesse.

In addition to Kate Middleton wearing the tiara two years in a row, the Duchess of Cambridge has donned her mother-in-law's signature headpiece at a handful of other events through the years, according to Glamour. And each time, it's considered a nod to Princess Diana, much to the delight of royal fans across the globe.

It'll be interesting to see if any other members of the royal family wear the Cambridge Lover's Knot Tiara in the near future. Could Meghan Markle one day don the headpiece? Or perhaps we'll have to wait until Princess Charlotte is old enough for the honor? Either way, whenever Kate Middleton wears the signature tiara, people pause and take notice. And with it having such a stunning effect, can you really blame them?

More Like This
Gabrielle Union Shares Sweet Video Of Kaavia In A Spot-On Little Mermaid Costume
Zaya Wade Is Rocking New Long Hair & As Gabrielle Union Put It, She's A "Vision"
A Peek At The New Hilary Duff x Carter’s Collection
Post Malone Shared A Bunch Of Sweet & Candid Details About Life With His 4-Month-Old Daughter