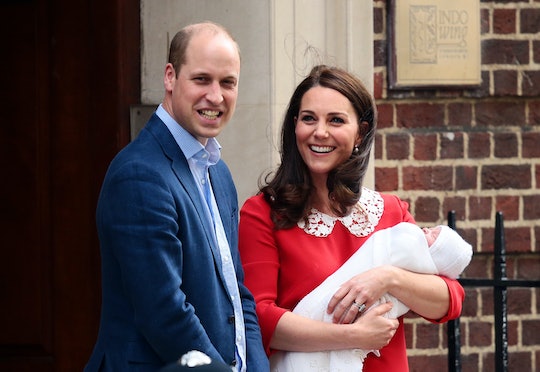 It can be easily argued that the only moment more anticipated than the birth of a royal baby is the moment the beaming royal parents step out of the hospital and in front of the cameras to introduce that baby to the world. And after The Duchess of Cambridge, Kate Middleton, gave birth to her third child, a son, on April 23 at 11:01 a.m. London time, she was expected, as it is customary, to appear before the media with her hair done, her clothes impeccable, and her face glowing. But the fascination with Kate Middleton's body after giving birth says little about her labor, delivery, and postpartum experience, and more about us as a global society and the unrealistic expectations we place on female and femme-presenting people, especially after they've gone through something as exhausting, excruciating, and potentially dangerous as child birth.

As reported by Sky News, Middleton's stylist was seen entering the Lindo Wing of St Mary's Hospital in London — where Middleton gave birth to not only the latest Cambridge baby, but also her oldest son, George, and her daughter, Charlotte — to make sure she had "a change of clothes" and would be looking "proper" for the formal reveal of her newborn. I'm not one to raise an eyebrow at or snub royal customs that I didn't grow up with and don't entirely understand, and I do not find this unrealistic expectation placed on The Duchess of Cambridge's shoulders to be any different than the postpartum beauty standards American women are encouraged (and shamed and judged) to adhere to. All women, regardless of where they live, where they're from, or whatever royal or non-royal title they hold, are expected to "bounce back" and "lose the baby weight" and wear so-called "flattering" postpartum clothes to hide the fact that their bodies have endured 10 months of change, an untold number of hours of trauma, and continued physical and hormonal changes post-birth.

So if you really want to know about Middleton's post-birth body, here's what actually matters. According to the Mayo Clinic, Middleton is probably experiencing intense cramps as her uterus works to shrink back down to pre-pregnancy size and as she stands on the stairs of the hospital and shows her baby to the world. According to WebMD it will take six to eight weeks for Middleton's uterus to go back to pre-pregnancy size, meaning her stomach will continue to bulge out as it did when she was pregnant. She's undoubtably bleeding, as her body gets rid of the blood and tissue that was inside of the uterus. According to the Mayo Clinic, for the first few days — and certainly for the first few hours — after birth the postpartum bleeding is heavy, bright red, and may contain some blood clots.

Because she lost blood during labor and delivery, and exuded an inordinate amount of physical and emotional energy, Middleton's body is undoubtably fatigued. Her breasts are likely swollen and engorged as they fill with milk and, according to the Mayo Clinic, that's a painful postpartum process. Her body is likely slightly swollen from the increase in fluids that helped prepare her for labor and delivery, too, and her body is undeniably sore.

Middleton's estrogen levels have suddenly dropped, according to WebMD, after increasing during pregnancy. The arches of her feet may have been flattened due to the extra weight her body put on during pregnancy and a surge of hormones that loosen ligaments in preparation for childbirth. In other words, her body is attempting to heal from pregnancy, labor, and delivery, so how it looks and whatever beautiful dress the duchess has decided to adorn it with pales in comparison to the incredible task it has just accomplished. Her body, like all postpartum bodies, is changed, is still changing, and needs time to heal.

There is one difference between Middleton's body and the bodies of American moms, though: the amount of time it will be given to safely recover from childbirth. According to the UK Government, if Middleton was a "normal" working mother and considered an eligible employee, she would be entitled to "up to 52 weeks’ maternity leave. The first 26 weeks is known as ‘Ordinary Maternity Leave’, the last 26 weeks as ‘Additional Maternity Leave’." According to ABC news, Middleton's maternity leave will last about six months, allowing her body time to heal from childbirth as she adjusts to live as a mother of three. The United States, on the other hand, is the only developed nation that doesn't guarantee new mothers paid maternity leave, and according to researchers at Abt Associates, one-quarter of new moms are forced to go back to work a mere two weeks after giving birth.

So while it's customary and often culturally required for a new mother to look "radiant" and "glowing" and "perfect" post-birth, know that rating her postpartum body in terms of looks and not physical change and ability is not only a disservice to women across the world, but a disservice to the power of childbirth. To hide the changes a woman's body has gone through to grow life, and to hide the work that body did to expel that life into the world, is to downplay an incredible feat of science and evolution and humanity.

Does Kate Middleton look lovely postpartum? Yes. But, in my opinion, it's not because our culture has required her to hide the remnants of pregnancy and delivery. It's because, despite a beautiful red dress and makeup and lovely hair, she still looks like an exhausted new mother who just gave birth for the third time. She looks like a "real mom," and the more we, as women and as mothers and as human beings, see postpartum women depicted in a realistic light, the better off we, and our bodies, will be.