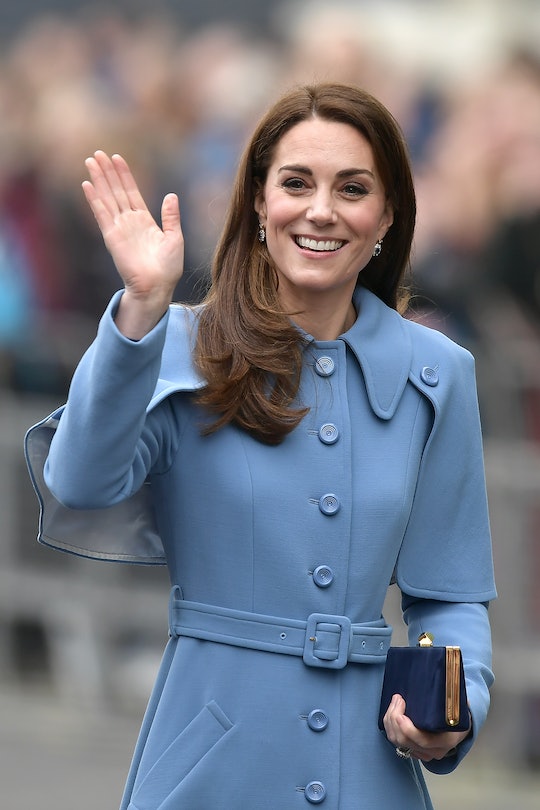 Most moms will develop a love/hate relationship with breastfeeding. While there's so much to love about nourishing and feeding your baby, it also comes with its hardships, too. And the Duchess of Cambridge, who's mom to three adorable kiddos, shared that she too can relate. During a recent royal appearance, according to People, Kate Middleton made a comment about breastfeeding and it shows that she gets it can be a struggle.

On Thursday morning, Middleton and her husband, Prince William, paid a visit to Sure Start, a program in Northern Ireland that supports parents with young children living in disadvantaged areas, according to People. During this visit, Middleton and Prince William had a lot to talk about with these parents, as they're parents to three young children who are all under the age of 5, according to Express.

During their visit, Middleton reportedly talked about breastfeeding with the mothers, according to Hello! Magazine, and praised them for dealing with the "struggle" that comes with it.

"They were really encouraging about breastfeeding," one mom in attendance, Rebecca White, said, according to Hello! Magazine. "They said we were all doing a good job, that it was really hard, it was a struggle, and well done for keeping going."

How sweet is that? Although her comment was pretty simple, her message was supportive and encouraging. And while she hasn't explicitly stated whether she breastfed any of her children, Middleton, who gave birth to her third child last April, certainly knows new parents appreciate being seen.

Breastfeeding can be a challenge for a slew of reasons; according to the Office on Women's Health, the struggle Middleton referred to may have been challenges with producing milk, latching, or getting enough sleep. Or, it's possible she was speaking about the experience as a whole.

During that same visit on Thursday, Middleton and Prince William also reportedly talked with the moms about the sleep deprivation that they still experience with their three young kids waking up early, according to Hello! Magazine.

One of the moms, Kathryn Ward, told the magazine that it was great to talk to them about this, saying: "Even though they get the help that they have, they're still parents as well and want to get up with their own kids. So they understand the stresses and pressures we're going through, even though they got a couple of people more hands on. They were fantastic. Really on our level."

Even if Middleton has never confirmed whether she has breastfed her three children, according to PopSugar, it's nice to hear she, at least, understands it's a struggle for many moms.

Whether it's breastfeeding, pumping, or getting enough sleep with your newborn, parenting is hard and that struggle is universal, even for those who wear tiaras every so often. And though those in the royal family are often reserved and tend to keep details about their personal lives out of the spotlight, the Duchess of Cambridge continues to show, every once in a while, that she's quite relatable.