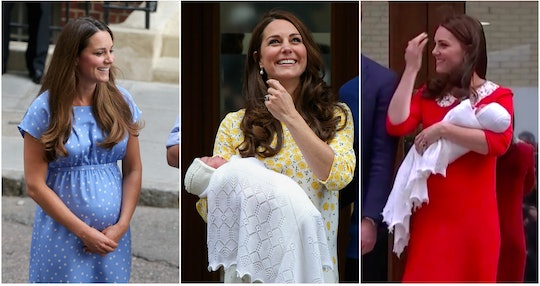 Royal babies are born just like any other babies — in a hospital; perhaps with nitrous oxide on-hand for pain relief; with dad ready to install the carseat and drive carefully home — except for a few details. The birth of Prince George in July 2013 offered an homage to the birth of Prince William in June 1982, with a staged photo op on the steps of the Lindo Wing. And when the Duchess of Cambridge stepped out into the public eye, all anyone could talk about was her look. Kate Middleton's dress after giving birth to the prince likewise sent people scrambling for a like-to-buy link.

This time around, she opted for a red dress with a lace yoke collar that lit up the grey street. Onlookers gave it a 10/10.

Following the birth of Prince George, Kate Middleton exited the hospital clutching her baby to her chest in a blue polkadot Jenny Packham dress that was promptly snapped up by Britain's fashionable. At the time, the dress caused quite a stir for its gentle swoop over Kate Middleton's postpartum belly — a powerful move to normalize the post-birth body by the Duchess. A fierce champion of mental health issues — and we note that postpartum depression affects up to 20 percent of women, per the World Health Organization — Kate Middleton understood the positive impact a role model like herself could have on other new mothers who found themselves in a strange new body after delivering their children. Even if other new mothers don't have a beauty team on hand.

The birth of Princess Charlotte on May 2, 2015, afforded the Duchess of Cambridge another opportunity to debut her baby to slightly batty fanfare outside the hospital. That time, she chose to wear a yellow floral Jenny Packham dress that signified the spring when she stepped out with her baby daughter.

Once again her hair was curled, her makeup was fresh, and she managed to wear her engagement ring (suggesting that, unlike others of us, it didn't need to be cut off by a jeweler mid-pregnancy), along with a pair of pearl dew-drop earrings.

Despite the imperative to prize the recovery of mother and baby ahead of all else, the public scrutiny over the birth (onlookers have been camped out for weeks on the pavement) created an amount of pressure to debut the baby so that the royal family could retire to bond and rest somewhere private. Following the birth of Princess Charlotte, Prince William brought her older brother George, then 2, to meet his sibling at the hospital. This time around, it's safe to say that they'll need a bigger stroller! (I jest, they seem to be into vintage prams.) Not that anyone is live-blogging it, but royal watchers noted that Prince William wore blue to introduce his son George, and also to introduce his daughter Charlotte. It is tempting to read into his attire, but we must concede that men have a rather less exciting fashion plate.

For those who can't get enough of the royal baby, expect a Christening to take place three months after the birth, so possibly around August. There, we will get another coordinated family theme, and a solid glimpse at the third, fourth, and fifth in line to the British throne.