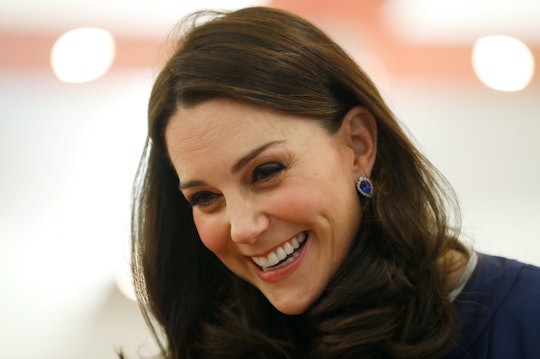 Kate Middleton's Due Date With Baby No. 3 *Could* Fall On A Very Special Day

It isn't everyday that a member of the royal family has a baby or gets married, though it sure is starting to feel like it. After all, both Prince Harry and Prince William have some pretty big life events happening soon. First up? Prince William and Kate Middleton are expecting their third child, who's reportedly arriving as soon as next month. Although baby number three's exact ETA has yet to be announced, it looks like Kate Middleton's due date with their third baby could fall on a very special and significant day.

Middleton's pregnancy was first announced in September of last year and Kensington Palace has only confirmed that Middleton's due date is in April 2018, as E! News reported. With April just around the corner, some new rumors about Middleton's alleged due date are somewhat plausible. The Sun reported that Middleton could give birth on April 23 and while that date might not mean much to Americans, it's a pretty big deal in England. Across the pond, April 23 happens to be St. George's Day, a "feast day of the patron saint of England," according to The Sun, which is typically celebrated with parades and dancing, though it's not a public holiday. So it looks like this little guy or gal would still have to go to school on their birthday.

But because Middleton's estimated due date is towards the end of April, it's also speculated that she could be a little late and she could give birth on Princess Charlotte's birthday, which is on May 2, as Metro reported.

Of course, since Kensington Palace nor Middleton has confirmed her exact due date, it's important to remember that these are strictly theories, but they may hold some merit. Based on the fact that the 36-year-old duchess' current list of engagements reportedly ends around March 7 (aka this Wednesday) and that she reportedly took off a few weeks before giving birth to Prince George and Princess Charlotte, according to Metro, it's plausible that a due date on or around April 23 could be accurate.

And if she doesn't give birth on April 23 or May 2, there's actually another pretty significant date that happens right in between. "... If she’s very late, as she was with George’s birth, she could even make it a very special wedding anniversary present to William, as they celebrate seven years of marriage on the 29th April," a palace source reportedly told The Sun.

Whether or not Middleton gives birth on one of those three dates, it looks like spring is already pretty a busy and meaningful time for the mom-to-be and her family, and their little one's birth will only make this time of the year even more special, whenever that inevitably happens.

Of course, whenever Middleton does give birth to their family's newest addition it'll be just as exciting as when she and Prince William welcomed Prince George — who was born on July 22, 2013 — and Princess Charlotte — who arrived on May 2, 2015 — to the world. This little one's birthday will undoubtedly be just as historic. Whether it happens on St. George's Day, Princess Charlotte's birthday, her wedding anniversary, or an entirely different day this spring, the birth of the next royal baby will obviously be exciting, global news — especially since shortly after Middleton is expected to give birth, Prince Harry and Meghan Markle will officially tie the knot on May 19.

The upcoming months for the royal family will be busy indeed. For them, of course, but also for the rest of the world who just can't wait for it all to happen.