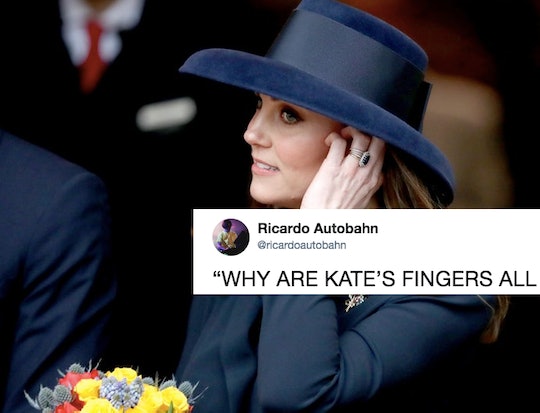 Sometimes the world makes sense, and sometimes people become convinced that Kate Middleton's fingers are all the same length. Sure, the Duchess of Cambridge is in the headlines all the time for her style, her love story with Prince William, and her adorable kids. However, this particular reason for fascination is totally new, totally mystifying, and totally hilarious. Of course, Twitter responded to it perfectly.

Come with me down a very weird wormhole, reader. What happened was that, after the Duchess of Cambridge went to visit a primary school in Oxford, pictures popped up of her holding a handbag. Then, British newspaper The Daily Mail published a story on Sunday, with the headline, "Why are Kate's fingers all the SAME length?" In it, journalist Lorraine Fisher claimed that Middleton's ring finger, middle finger, and pointer finger were "all very similar" in length, using the handbag photo as evidence. Fisher then proceeded to analyze what Middleton's finger length might mean about her personality, and to quote a developmental biologist who really delved into why Middleton's digits might be the same length. (Apparently it results from high estrogen exposure in the womb, according to the report. )

It's all kind of bizarre, especially when you take into account that the photo accompanying the headline showed Middleton's fingers with a box drawn around them, and the box clearly demonstrated that the fingers were not all the same length. Naturally, people on Twitter seized upon the front-page "scoop," and it began to take on a life of its own.

Some Couldn't Get Over The Box

Then, There Was This Delightful Trend

According to The Cut, the Middleton Fingergate news story took up an entire two-page spread in the newspaper. Forget Brexit or President Donald Trump's upcoming meeting with Kim Jong-un, this is the news that matters!

Middleton's been one busy royal lately. In addition to walking around with FINGERS THAT ARE ALL THE SAME LENGTH, she's pregnant with her third child with Prince William. The newest royal baby is due in April, according to Good Housekeeping, and will join older siblings Prince George and Princess Charlotte. Needless to say, fans of the royal family are getting extremely excited. Certain sites are even taking bets on what the royal baby's name will be, with Alice and Elizabeth at the best odds if the baby is a girl, and James in the lead if it's a boy, according to Good Housekeeping.

As with her two previous pregnancies, Middleton has been experiencing the horrible morning sickness known as hyperemesis gravidarum. Yes, I know it sounds like a spell from Harry Potter, but it's actually an awful condition involving constant nausea and severe dehydration, and Middleton had to go to the hospital when she got it during her first pregnancy. She seems to be past the worst of it this time around now, thank goodness, which means that she's back to making public appearances, and the papers are back to analyzing everything about her.

It must be a very strange thing to marry a British prince. On the one hand, you're living a fairy tale. Not only are you (probably) madly in love with a rich, handsome man, but you get to live in a freaking palace, and be the envy of millions. On the other hand, the British newspapers run in-depth stories about the length of your fingers.

How I'd love to hear Middleton's candid thoughts on this whole story. However, according to The Daily Mail's story, her finger length means that she's "a bit aloof," so I guess she won't be giving any confessional interviews anytime soon.

Keep your eyes peeled, because the two-page spread on Meghan Markle's fingers will probably be arriving any day now.