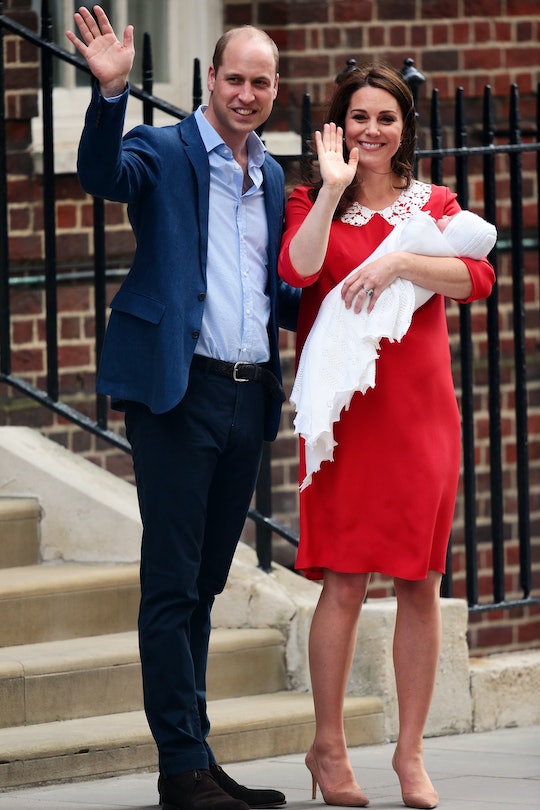 The third royal baby is officially here! The Duchess of Cambridge and Prince William welcomed a healthy baby boy on Monday, April 23 at St. Mary’s Hospital in London, first announcing the exciting news via Twitter. And now, just hours later, the first photos of Kate Middleton after giving birth have arrived and she looked so happy to be a mom of three.

The little prince was born at 11:01 a.m. local time and weighed 8 pounds, 7 ounces, Kensington Palace announced on Monday morning. "The Duke of Cambridge was present for the birth," the statement shared on Twitter read. "Her Royal Highness and her child are both doing well."

Chatter of the royal baby's arrival started days ago, but kicked into high gear in the early hours of Monday morning when Kensington Palace announced that Middleton had been admitted into the hospital in Paddington, London as she was in the early stages of labor. "The Duchess travelled by car from Kensington Palace to the Lindo Wing at St. Mary’s Hospital with The Duke of Cambridge," the statement shared on Twitter read, followed up a photo of photographers and reporters lined up outside the hospital's doors.

And just hours later, Middleton and Prince William walked onto the steps of the Lindo Wing, with their little prince nestled in the duchess' arms. The proud new parents of three looked beyond happy to have welcomed their newest bundle of joy.

"They paused on the steps of the Lindo Wing to allow the world to catch a first glimpse of the new-born prince," the royal website noted. Shortly after photographers got their shots of the happy family, Prince William got his new son settled into a car seat before he drove his family home to Kensington Palace, according to The Royal Household.

As you can see, Middleton and Prince William were beaming after welcoming their first child.

Princess Charlotte was born about two years later on May 2, 2015, also at St. Mary's Hospital in London. According to The Royal Household, Prince William took Prince George to visit his little sister the day she was born. Princess Charlotte and her parents left the hospital the same day, the royal website noted.

The little princess' name wasn't announced until two days later on May 4. "The Duke and Duchess of Cambridge announced that they would name their child Charlotte Elizabeth Diana," the royal website explained. "She will be formally known as Her Royal Highness Princess Charlotte of Cambridge."

Again, Middleton and Prince William's happiness were almost contagious as they left the hospital with Princess Charlotte in their arms.

On Monday, April 23, before the family left the hospital, the official royal baby announcement for Middleton and Prince William's third child was placed outside Buckingham Palace. Although the baby's birth was first announced on Twitter, the royal family kept with tradition by placing the formal, framed, and signed announcement outside the palace on a golden easel.

As they've done in the past, Middleton and Prince William, with their new baby in tow, headed back to their home at Kensington Palace shortly after giving the world a glimpse of the royal family's newest little prince. It'll likely be a few more days until they share an official portrait of the newborn, but these sweet snapshots of Middleton, Prince William, and their little prince will certainly feed the world's royal baby fever for now.