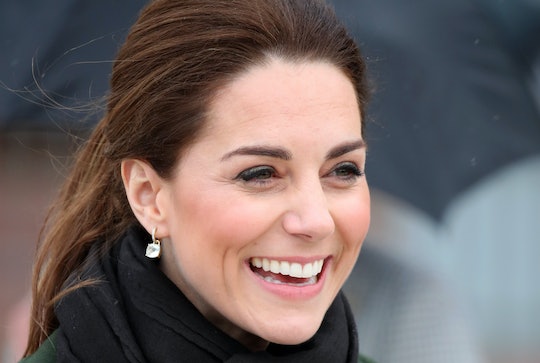 Kate Middleton Might Wear This Crown For Her Future Coronation Ceremony

Right now, sure, she's just a mom and duchess. But someday, Kate Middleton will be queen consort. It might not be soon, as her father-in-law Prince Charles is next in line for the throne. Still someday, this will likely happen. Since talk of jewelry is clearly in order when talking about the line of succession, you may be curious about what Kate Middleton will wear when the day finally comes. And Kate Middleton's likely future crown has a fascinating & slightly dark history.

As London's Evening Standard newspaper detailed, all the tiara talk regarding Kate actually started a couple years ago.

It was then that Middleton (who as fans know was settled into her role as the Duchess of Cambridge) began to wear more royal jewelry — specifically Diana's jewelry. The late Princess of Wales' gorgeous piece, known as the Lover's Knot, was one of Kate's late mother-in-law's frequent go-to's, as the British newspaper reported in another article.

The House of Garrad jewelry dynasty created the sparkler originally for Queen Mary, in 1914, with the piece itself incorporating gems from a previous royal tiara. According to the website Fashionista, Kate started wearing the vintage stunner in 2015, and has worn it again since.

Believe it or not, though, this fabulous piece, which Elle described as featuring large teardrop pearls dangling from diamonds, will probably not be suitably lavish when Prince William becomes King of England... meaning, according to the Evening Standard, that Kate will be Queen Consort. Which requires some real suiting up, I guess.

Once that happens, Kate may end up with the Queen Mother's crown, detailed London's Sun newspaper. This headpiece makes the Lover's Knot — which Queen Elizabeth loaned to Diana during her marriage to Charles and whose dazzling gems were reportedly heavy enough to create a headache for Di — look understated.

This larger crown was designed in 1937, also by Garrard, and boasts 2,800 diamonds, including one gem known as the "Kohinoor," the Sun reported (or Koh-i-noor). The jewel has, over time, been the subject of requests for return by both Pakistan and India, the paper detailed. While the Sun reported that it was given to Queen Victoria by the Sultan of Turkey in 1849, the Smithsonian noted a different chain of events that resulted in Queen Victoria receiving the diamond. A 10-year-old boy who became king was forced to sign it over to the British, as well as the sovereignty of his kingdom, according to the site.

The stunner, which also features "amethyst" velvet and fur trim, as per the Standard, really says "royal" with a capital "R." Currently part of the Tower of London's Crown Jewels collection, the paper added, the Queen Mum's headpiece also sat on top of her casket during her 2002 funeral procession.

Geez, I know it's priceless and all, but this newer piece seems a bit... dated, fashion-wise. In truth, if I were Kate, I would hesitate to have to put on that sucker, between the velvet-domed part and the fur that's sure to upset some folks.

Plus, the Koh-i-noor diamond is also controversial due to its history of being traded for power, money, and lives, according to the Smithsonian Museum's website. It's also been considered cursed in the past.

(At least India’s solicitor-general said in 2016 that the diamond "cannot be said to be forcibly taken or stolen as it was given," meaning that maybe that nation has stopped expecting the gem back, according to the Standard. One thing off the future's Queen Consort's plate, right?)

Luckily, as E! News noted, Kate is popular with the public for her causes. She has ages before she has to worry about sporting this headpiece, and getting any international flack for it. Maybe by then velvet headgear will be back in style? Though, I suppose, if you're Queen Consort, it's never really out.