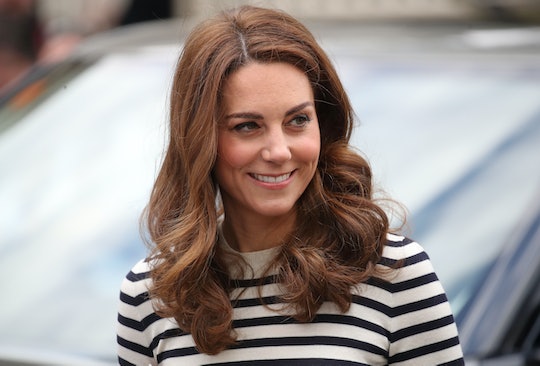 She's an experienced member of the royal family who seems to have it all down, from the perfect outfit for every occasion to the deep involvement in charitable causes. She's even perfected the art of wearing a heavy tiara gracefully. But she's also been where they are, so Kate Middleton's message to Meghan Markle and Prince Harry is just the sister-in-law vibe they'll appreciate.

As People reported, Middleton, out with the other half, Prince William, just a day after Harry's big announcements at Windsor Castle that Markle had delivered a healthy boy, was asked by the press about her thoughts on the clan's new addition. And, as usual, her response was just right.

“It’s really exciting for both of them,” she said to reporters. “These next few weeks, it’s always very daunting first time around, so wish them all the best.”

The likely future queen-to-be noted to the mag as well that it's nice weather at this time of year to be dealing with an infant (and surely she is thinking the chill of an English winter couldn't be the best time to bring a baby into the world, what with flu season and all. That's what I was pondering, at least.)

"...With Louis and Charlotte just having had their birthdays...It’s such a great time of the year to have a baby. Spring’s in the air. As William said, look forward to meeting him and finding out what his name’s going to be," she explained.

Prince William, on the other hand, was a little less polite about it all (it is his brother, after all), as NBC's Today reported. The future King of England joked that "we’re absolutely thrilled and looking forward to seeing them in the next few days, when things have quieted down a bit. I’m very pleased and glad to welcome my brother to the sleep deprivation society that is parenting!"

If I were Prince Harry and Duchess Meghan right now, I would welcome advice from these two. First of all, they're super-experienced: Between Prince George, 5, Princess Charlotte, 4 and Prince Louis, 1, William and Kate have certainly been there, as Us Weekly noted.

The Duke and Duchess of Cambridge have been spied many times talking about the difficulty, and joy, of parenting. We know they are involved, relatable parents themselves who walk their kids into school just like anyone. The pair do have a nanny, according to The Daily Express, but both seem to have almost daily commitments and haven't been noted for having added any staff with their third baby.

To add to that, Middleton's children seem to have lovely manners and are grounded, despite their royal heritage. The mother of three seems to pull off working pretty hard in the name of the crown while finding the perfect balance to roll around in the grass with the kids.

I think Meghan and Harry are lucky to have a relative like Middleton that seems to have it all together.