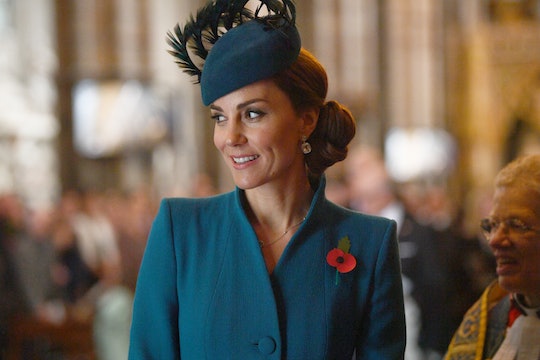 I haven't done an exact calculation lately, but doesn't Kate Middleton always seem to be on one official royal mission or visit, if not another? She does have three kids, one of them age 1, and it would be totally understandable if she worked at least 50 percent less, skipping some of her many charities' events here or there. Since that's clearly not the Duchess of Cambridge's style, it's good to know her give-it-your-all work ethic has been rewarded by the higher-ups at the family "firm." Kate Middleton's new honor from the Queen gives her this impressive rank, and it's totally well-deserved.

As Hello! magazine reported, Queen Elizabeth has noted Middleton's dedication with a special honor announced on Monday (also her wedding anniversary — a big day for Middleton), the not-always-granted title of "Dame Grand Cross of the Royal Victoria Order" (or the catchy GCVO for short).

Such accolades can apparently only be made by the Queen herself, for services to her, Hello! added, and certainly shows that the monarch has noted just how much Kate's nose is to the grindstone. As Town & Country noted, a Dame Grand Cross is the highest rank in the Royal Victoria Order and is the equivalent of having been knighted.

After all, Middleton oversaw more than a dozen charities at the time PopSugar reported on the topic last year, most of them focusing on her main passions, children's health and wellness, physical fitness, and the arts.

Hello! Canada added the duchess has become patron of several additional causes in the past year, including the Royal College of Obstetricians and Gynaecologists and Evelina London Children's Hospital — not to mention the fact that watching out for Wimbledon's famed tennis tournament became Kate's domain after 64 years under the Queen's eye.

The Duchess also announced the additional commitment to be the famed Victoria and Albert Museum's first-ever royal patron just weeks after having Prince Louis last year, as the Express confirmed.

Clearly, Queen Elizabeth realizes what a loyal helper she has in Middleton, whose new honor was originally created by Queen Victoria in 1896 to those who worked on the famed monarch's behalf, as Hello! explained.

Majesty magazine editor-in-chief Joe Little noted on Twitter that a ceremony for the order will take place May 3 at St. George's Chapel, Windsor Castle, so we can assume this is where Middleton will get her "promotion," an honor that Town & Country added is shared by Prince Harry and the Duke of Edinburgh, among others in the royal family. (Though their official titles within the order are different, of course.)

This means that the next time Kate appears at a formal event, she will be able to wear the blue sash that distinguishes the Royal Victorian Order from others, the magazine added.

And with the royal family's official website saying there are a variety of honors the Queen bestows in addition to Kate's new title (Kate was also made a member of the Royal Family Order within the last year, as Good Housekeeping noted), this means it's never too late to come up with something you yourself can do to be of service to the British monarch.

I know, I know, it's a long-shot. But hey, if Angelina Jolie and Steven Spielberg can become honorary knights and dames, as BuzzFeed reported, maybe the rest of us stand a chance, too. I mean... maybe? In the meantime, a big congratulations to Kate Middleton for another honor to add to her collection.