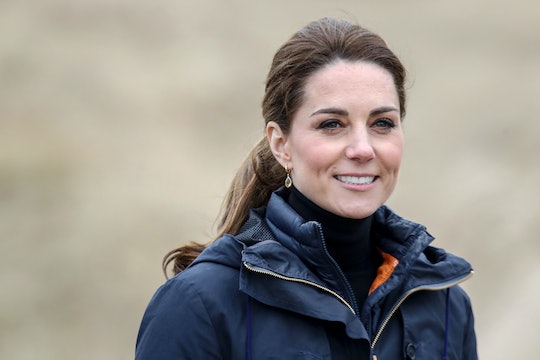 The royal family officially has their hands full with their kids. Kate Middleton and Prince William's little one, now 1-year-old son Prince Louis, is not so little any more and he's apparently a bit of handful with all of his growing up and such. In fact, according to Kate Middleton's newest update on Prince Louis, he is always on the go, which has to be a bit tiring for his mom and dad.

During an official royal engagement in London on Tuesday, Middleton shared that her youngest child has definitely thrown them in for a loop. Sure, the parents are experienced when it comes to parenting their older children, 5-year-old Prince George and 3-year-old Princess Charlotte. But, from the sounds of it, Prince Louis has surprised them in a new way, according to People; Middleton said this week that Prince Louis "is keeping us on our toes."

Not only does he seem to be always on the move, but it sounds as if he's a bit mischievous, too. "I turned around the other day and he was already at the top of the slide — I had no idea!" she added, according to Town & Country.

This isn't the first time that Middleton has alluded to her son constantly being on the go. In March, just two months before Prince Louis turned 1 year old, Middleton reportedly revealed during an official appearance that he had been trying to keep up with his older siblings, according to Hello! Magazine. "Louis just wants to pull himself up all the time," she said, according to Hello! Magazine. "He has got these little walkers and is bombing around in them."

And a few months before that, in January, Middleton told well wishers that Louis is a "fast crawler," according to ELLE. Clearly, he's a a baby who knows what he wants — and that is to move.

But a lot has changed since those months have passed. In April, Prince Louis turned 1, and it sounds like he has traded in crawling for walking and exploring the world around him. And in the photos released of him from his big day, you can detect that sense of mischief; he can be seen crawling in the grass with moss all over his sweater and the biggest smile plastered on his face. Sounds like a kid who isn't afraid of exploring or getting his hands dirty.

Although Prince Louis might be keeping his parents on their toes, his older siblings cannot get enough of him. Just weeks after he was born, it was reported that he was already bonding with Princess Charlotte, according to Marie Claire, and that she was reportedly "taking her big sister duties very seriously" which sounds like the sweetest thing, ever. And now that Prince Louis can play with his older siblings and join them on their adventures, it's nothing short of exciting for them.

Prince Louis' ability to keep his parents on their toes sounds like a very interesting trait for him to possess. Luckily, it doesn't seem to bother his parents too much — they're seasoned pros when it comes to parenting at this point.