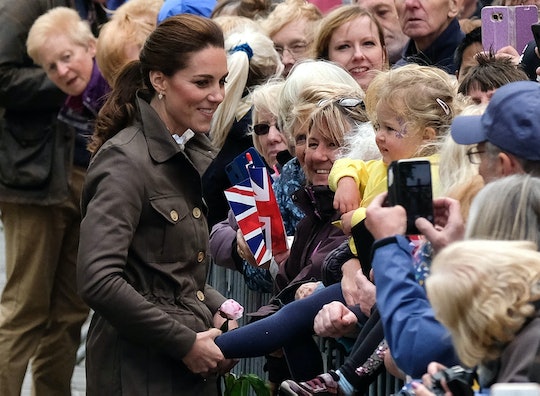 When you conceptualize a princess, the animated characters from TV and movies likely come to mind. One of their most characteristic features? Ballgowns reminiscent of upper class styles from two centuries ago. Today, modern princesses take on a much more down-to-earth role, and Kate Middleton's response to a little girl asking her why she's not dressed like a princess, specifically a Disney princess, sums it up perfectly.

During a visit to see her husband Prince William in Cumbria on Tuesday, Middleton was given a bouquet of flowers from two young girls who came to visit her. Then they proceeded to ask the Duchess of Cambridge a few questions about being royal. Chief among them? Why she wasn't wearing a "Princess Elsa dress," as People reported, referencing the iconic Disney movie, Frozen.

“I know. I’m sorry,” Middleton responded, according to People. “I came in my trousers and my coat because I’m going to see some sheep.”

Instead of a gown like Elsa, according to Town & Country, Middleton arrived wearing a tracker jacket over a t-shirt, as well as dark jeans and boots suitable for trekking through grass and mud. It was a sweet moment, but also a telling one: princesses as we know them today take on a much different, and more practical, role in their families and society. And that's not a bad thing.

Though Middleton, technically a duchess, and other members of her family are extraordinary fashion influencers and their clothing and shoe choices are observed and keenly noted, it's true that the gowns and tiaras are reserved for evening events of high priority.

However, the shift in fashion is indicative of a greater change in the structure of the monarchy. Princesses and other royal roles are no longer figureheads, they are active members of their communities and countries. Duchess Kate, for her part, is noted for her work supporting many causes around the world, notably, children's mental health, according to The Royal Household.

"The Duchess devotes her time to supporting a number of charitable causes and organisations, several of which are centered around providing children with the best possible start in life," Middleton's page on the site reads.

Of course, when she's not working on advocacy and the betterment of her country and the world (a small task, truly) she's raising the next generation of royals, and the next beloved princess, 4-year-old Charlotte.

Despite their wildly abnormal life circumstances, Life & Style reports that both William and Kate have noted that they want to do their best to "raise their children normally," so as to ensure that they have the best chance possible of adjusting and acclimating to the rest of society and the world.

It's true that to be a good leader you cannot be too far removed from the people you are governing (or, in this case, leading in other ways) and Kate Middleton seems clear on that. Whether she's in a ball gown or skinny jeans, this is a princess who knows her only purpose isn't just to look nice.