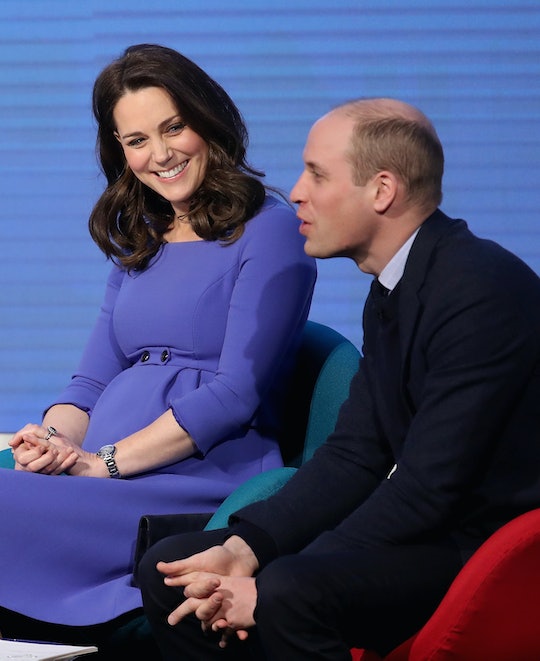 Kensington Palace Announces The Birth Of Kate Middleton's Son, & You Can Officially Celebrate

Hear ye, hear ye! The latest royal baby has made his arrival! The Duchess of Cambridge and Prince William have welcomed a healthy baby boy. And Kate Middleton's son's birth announcement shared some of the details, but more information is sure to come. Here's what is known so far.

Kensington Palace announced the birth on Twitter early Tuesday morning, sharing that the baby was born at 11:01 GMT. He weighs 8 pounds, 7 ounces and Prince William was present for his birth, according to the announcement. Both mother and baby are doing well, and the baby's name has not been shared at this time.

The Daily Express reported that Middleton was in the early stages of labor on Monday morning, at which time she reported to the Lindo Ward of St. Mary’s Hospital. From the sound of things, everyone is recovering well.

As you probably noticed, the official birth announcement wasn't released immediately after the baby's birth, which appears to be customary for the royal family. Hello! Magazine reported that the family prefers to take a few hours to enjoy their new additions in private before spreading the word. The immediate family is notified right away — as was the case with the latest birth as well — according to Kensington Palace, but the public is left waiting for a little.

The duke and duchess took their time with their first two children as well. When Middleton delivered Prince George at 4:24 p.m. GMT on July 22, 2013, the announcement wasn't released until about 8:00 p.m. GMT, according to Hello! Magazine. There was a delay with Princess Charlotte as well, who was born at 8:34 a.m. GMT but was not announced until 11:00 a.m. GMT. This desire for a bit of privacy is completely understandable and well within the family's rights. The first few hours of life with a new baby are precious, and no one can blame the family for wanting to soak it all in without distraction.

Along with the birth details, Kensington Palace also tweeted out that the queen and other immediate royal family members, as well as Middleton's own family, were notified of the birth. They were reportedly "delighted with the news," a statement that I'm sure refers to pretty much anyone who has been anxiously awaiting the babe's arrival. Notifying family members in the order is also par for the course, as Hello! Magazine reported, with the queen being among the first to know. Other family members were reportedly alerted of Prince George and Princess Charlotte's births via an encrypted phone call.

Prince George and Princess Charlotte have apparently not come by to meet their new little brother as of yet, but The Sun reported that Prince William is planning to bring the two of them to visit later in the day.

Kensington Palace officials aren't the only ones to get in on the action and excitement of spreading the news of the latest royal birth. As tradition calls for, Tony Appleton, the town crier, also spread the word, according to Town & Country. While not an official royal position, a town crier has announced royal births for the family since medieval times, sharing news to the historically illiterate general population. A billboard will also share the details outside of Buckingham Palace for walkers-by to read all about the new baby boy.

A press notice was also sent out to reporters in the area at 1:03 p.m. GMT, sharing the same information as the Kensington Palace tweet, according to a separate tweet from Royal Central. Other details, such as the baby's name have yet to be shared, but will likely come in due time. For now, it is enough to know that mother and baby are both doing well and the family is overjoyed. Cheers!