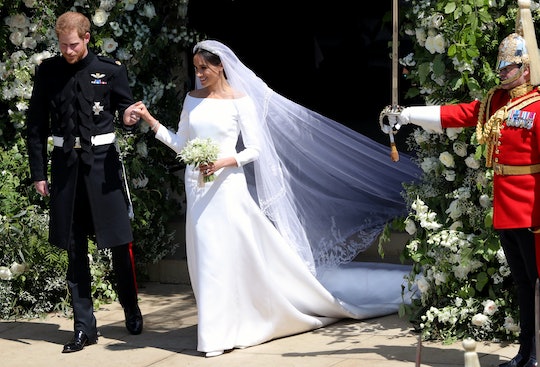 This morning, Prince Harry, The Duke of Sussex, married Meghan Markle, The Duchess of Sussex, in a ceremony at St. George's Chapel at Windsor Castle. This royal wedding, of course, draws comparisons to Harry's older brother, Prince William, Duke of Cambridge's wedding to Kate Middleton, Duchess of Cambridge in 2011. Middleton stunned in a very memorable gown, influencing wedding dress trends, as most expected she would. Markle's dress is likely to have a similar effect. Unsurprisingly, comparisons of Kate Middleton's wedding dress vs. Meghan Markle's dress were rampant.

After much speculation regarding who Markle had chosen to design her wedding gown, with names like Stella McCartney, Ralph & Russo, and Erdem, and more being thrown about, she looked supremely elegant in a pure white gown with a bateau neckline and three quarter-length sleeves designed by Clare Waight Keller, the British-born, first female artistic director of Givenchy. Markle's veil, too, was a show-stopper, featuring flowers from each country in the Commonwealth, as well as the state flower of California — her birthplace — and wintersweet, which grows on the grounds at Kensington Palace, as a Palace reported noted.

Middleton selected Sarah Burton at Alexander McQueen to design her iconic gown and worked alongside her throughout the design process, as Town & Country reported. The long-sleeved lace and floral beauty kept her shoulders and back covered and featured a long train. Kate looked the traditional picture of a bride, without sacrificing her style along the way. Good Housekeeping reported that her "something blue" was a ribbon that was sewn into her gown, all the easier for her to carry it with her throughout her day. The timeless gown is just as lovely in 2018 as it was when she wed her own prince seven years ago, in 2011.

Though the two dresses are, of course, quite different, each reflecting the special touches of each woman's unique sense of style, there are general similarities, as well. Both women's dresses, as expected, included sleeves, covered their backs, and didn't show any cleavage. Kate's skirt was slightly fuller with a much-longer train and contained ornate lacework and embroidery, while Meghan's dress was extremely simple. That being said, Kate's lace had some floral elements and Meghan had flowers on her veil and, like Kate's, Meghan's dress came in at the waist, rather than falling completely straight all the way down.

Though many expected a fussier, frillier, more princess-style gown, it probably shouldn't actually be shocking that Markle went a very different way, because she might have dropped some extremely-veiled hints in the past (like, prior to meeting Harry past).

It's possible that Markle and Waight Keller took a page out of another famous bride's wedding day look. Meghan previously told Glamour that her favorite famous wedding dress was the simple white slip dress that Carolyn Bessette Kennedy wore in her wedding to John F. Kennedy Jr. in 1996. Though the dress she wore on her own wedding day was a more royal, refined version that better fit with St. George's Chapel instead of coastal Georgia, the dress wasn't a complete departure from the dress she once called "everything goals."

Plus, like her now-sister-in-law's gown, which influenced wedding dress trends almost immediately after Middleton revealed it to the world, Meghan's gown, too, is likely to inspire brides when they're selecting their own gowns, as well as designers undoubtedly already hard at work on dresses inspired by Waight Keller's classic Givenchy beauty.

There's no doubt about it: both timeless, iconic dresses will have a place in history — and fashion history — and will likely inspire brides for many, many years to come.