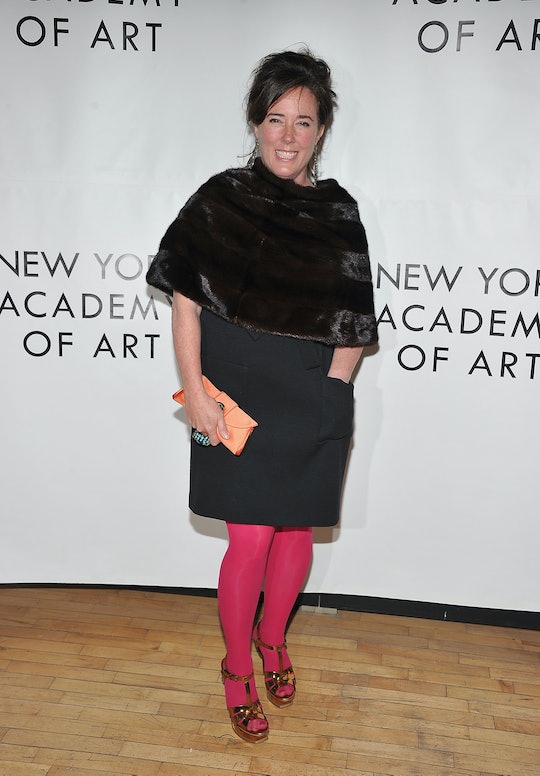 Kate Spade Is Dead At 55, & Longtime Fans Are Heartbroken

On Tuesday, news broke that famed fashioner designer Kate Spade died at 55 by an apparent suicide, according to The Boston Globe. Following the upsetting report, fans took to Twitter to commemorate Spade's impressive legacy in the fashion world and her life. Romper reached out to Spade's representative for comment, but did not hear back at the time of publication.

Spade was reportedly found dead in her New York City apartment around 10:20 a.m. Eastern Standard Time, according to The New York Times. Although Spade's family and team have yet to release a statement on her apparent death by suicide, many people are taking to social media to mourn her death.

Of course, it's no surprise that many people have been moved by this heartbreaking news. Spade was a fashion icon, after all, and her hard work as a female entrepreneur was beyond impressive. For starters, Spade launched her gorgeous line of handbags in 1993, just eight years after she graduated from Arizona State University, according to Racked. Making matters even more incredible is that Spade's handbags were like no other, and she put a lot of creativity into her work. To sum Spade's vision up, she wanted her line to be a solution to big and bulky purses of years past. "I was looking for something that could be less serious. More personal," Spade said about her initial concepts for the fashion house, according to the Sun Sentinel. "I also wanted timelessness. Handbags should be both. That's what designers were forgetting. So many bags can hold a kitchen sink but they're just big black bags."

Spade's journey to success wasn't without support. Andy Spade — Spade's husband of 24 years and the brother of actor David Spade — helped her market her original line of handbags at various trade shows. And it was Andy who encouraged Spade to keep pursuing her dreams after she experienced some self-doubt following a trade show in New York City. Spade recalled to NPR:

Well, I remember crying because when I came home, we hadn't even sold enough to cover the cost of the booth. And I started crying. And Andy said, well, who did you get? And I said, well, we got Barney's. And he said, OK. And I said, Fred Segal in Los Angeles, and he was like, right? And then it was - he goes, Katie, (laughter) he said, you've got two of the best stores in America, why are you crying? I said, I think we should shut it down. I'm very conservative. And I said, I have no interest in losing money. I said, and we've - you know, we've already spent $4,000. That's it for me. I'm not a gambler. So that's where Andy was like, no, keep going ...

Spade's perseverance paid off. Spade had amassed an estimated $200 million fortune at the time of her death, according to Celebrity Net Worth, and her beautiful handbags are now iconic pieces of art.

Although Spade and Andy sold Kate Spade New York to Coach for $2.4 billion in May 2017, the couple's entrepreneurship was far from over. Prior to Spade's death, the two were focused on growing their new brand, Frances Valentine. Frances is the name of Spade and Andy's 13-year-old daughter.

Obviously, it's difficult to sum up a dynamic, creative, and influential person's legacy in a few paragraphs. Although it's not an easy feat, fans on Twitter are sharing moving anecdotes about Spade's lasting impact on their lives.

"I have these two quotes hanging in my bedroom, and look at them every day," one fan captioned a shot of influential Spade quotes, according to Twitter. "Kate Spade was one of my favorite designers. Mental illnesses can impact anyone despite fame, money, or success. Rest easy."

"Everyone remembers their first Kate Spade," someone else said. "She was an entrepreneurial force who helped generations of women feel confident and classic."

"Ask a girl about her first Kate Spade bag and she'll have so many wonderful things to tell you," another commenter penned. "She was a female entrepreneurial force to be reckoned with; a real inspiration. She was so loved & so are you. You aren't alone. National Suicide Prevention Lifeline: 1-800-273-8255."

"My grandmother gave me my first Kate Spade bag when I was in college. I still have it," Chelsea Clinton tweeted. "Holding Kate’s family, friends and loved ones in my heart."

Others are taking the time to express support for those who might be suffering from mental health issues.

"Incredibly saddened by Kate Spade’s tragic suicide at only 55. Depression is a life threatening illness just like heart disease, cancer, or sepsis," a health professional penned. "There should be no stigma about mental health—only treatment, awareness, and compassion."

"With Kate Spade’s passing, it’s an important reminder that money, fame, and capitalistic success cannot beat back depression or mental illness," another person argued. "Check in on your people. Talk about feelings. Discuss mental health. Open those doors. Take care of each other."

"The death of Kate Spade brings light to a side of mental health that needs to be addressed more: just because someone my seemingly have it all does not mean they can’t struggle with their mental health," a commenter pointed out. "Mental illness doesn’t have a socioeconomic class. Anyone can be a victim."

There's no doubt Spade's impressive legacy will live on through her fans. Spade built an empire that helped make people feel beautiful and special, and this fact deserves recognition.