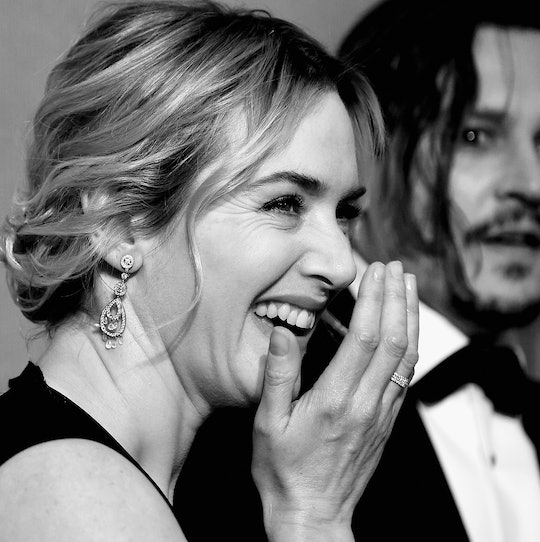 It was 1997 (Or was it 1911? Semantics!) when Kate Winslet didn't share her door with Leonardo DiCaprio, leaving him to drown in the frigid Atlantic. But now, nearly 20 years later, it seems as if that "Oops, there's no more space on this roomy, wooden, flotation device that's going to keep me alive in this tragic boat accident that's going to kill thousands of people" moment is freezing water under the unshared bridge. During the 2016 Golden Globes, Winslet and DiCaprio hugged and had a secret conversation that set the Internet on fire with 'shipping goals for these to ship-wrecked lovers. Jack and Rose forever! Jack and Rose forever!

There were actually two moments, if we want to be precise. The first came on the red carpet when DiCaprio told Entertainment Tonight's Nancy O'Dell that Winslet is his favorite actress in the industry. Of course she is! The two starred in Titanic together, then starred together in 2009's Revolutionary Road. Besides that, they're two of the most famous people in the world and have surely crossed paths constantly their decades' long careers.

But as fans, we want more than just professionalism, and friendship, and mutual respect. We want answers! Answers to fictional questions and apologies for fiction wrong-doings! THERE WAS ROOM ON THE DAMN DOOR, KATE, ER ROSE, ER WHATEVER.

I'm getting ahead of myself.

So after that sweet red carpet shout out, their second moment came behind the scenes. The two actors embraced in the crowd, and I'm not alone in my hope that this was the moment where Winslet righted a 19-year-old wrong. And yes, perhaps it James Cameron's fight to be had — he wrote the scene, after all — BUT STILL. Rose, how could you?

And then, if that wasn't enough, the HUG:

There you have it. It doesn't matter if Winslet was telling DiCaprio that his fly was down, or that Bill Paxton is in the restroom talking again about how Twister is the greatest epic of all time, or if they're out of champagne. I'm not alone in my desire for this secret conversation and heartfelt embrace to be about their hearts, and how they should go on, even after, you know, the whole she-let-him-die thing.

We all want it!