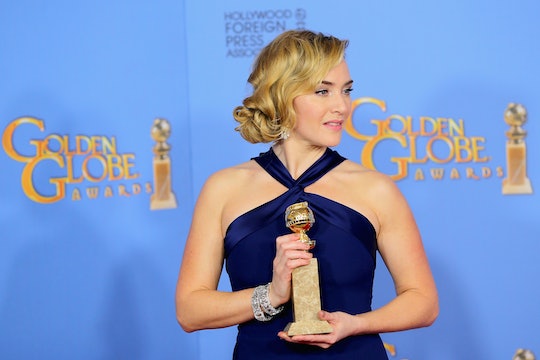 Guys, guys, guys. If you woke up this morning wondering, as I did, what did Kate Winslet wear to the Golden Globes, fear no more, because we finally have an answer. The exceptionally talented actress and Hollywood icon showed up to the show wearing a stunning blue floor-length frock with a halter neckline and a beautiful, elegant side-swept 'do. Winslet, who's nominated in the Best Performance By An Actress In A Supporting Role In A Motion Picture category for her role in the blockbuster film Steve Jobs, is no stranger to the award show circuit, but that doesn't mean seeing her on the red carpet will never stop being exciting.

This year marks the actress' 10 Golden Globe nomination, and if she takes home the Globe, it'll be her fourth win — an impressive feat that showcases just how impeccable Winslet's acting chops are. In 2012, Winslet took home the award for Best Performance by an Actress in a Mini-Series or a Motion Picture Made for Television category, which she won for her performance in Mildred Pierce. Three years earlier, in 2009, Winslet took home Golden Globes in two categories: first, for Best Actress In A Motion Picture — Drama for her performance in Revolutionary Road (she co-starred alongside — who else? — Leonardo DiCaprio), and again for Best Performance By An Actress In A Supporting Role In A Motion Picture for the film The Reader. Aside from the litany of accolades her film and TV performances have earned her, Winslet is also an outspoken advocate for body image and body positivity in Hollywood.

At an October 2015 event, Winslet revealed why she wouldn't let L'Oreal retouch her Lancôme ads:

I think [young women] do look to magazines, I think they do look to women who have been successful in their chosen careers and they want people to look up to, I would always want to be telling the truth about who I am to that generation because they've got to have strong leaders.

Her message on arming younger generations of women with "strong leaders" has always felt evident in everything Winslet does, particularly down to her fashion choices. Her red carpet resume reads like a timeless analysis of pose, culture, and sophistication and this year's look was only further emphasized that.

Here's a peek at her stunning look: