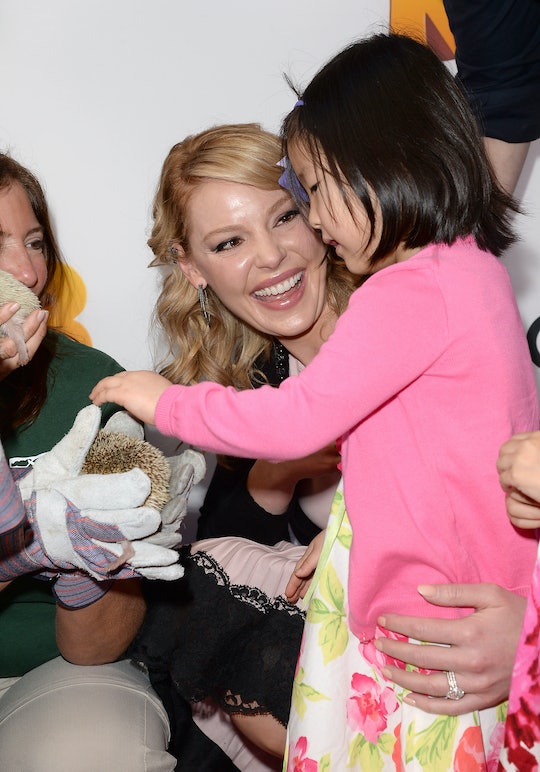 Katherine Heigl Isn't Afraid To Tell You What She Thinks

Katherine Heigl is no stranger to criticism. Particularly as a mom, she's been the target of hateful comments on pictures as innocuous as her infant son in his carseat. But now, at 39, Heigl knows her worth. And when it comes to the job of raising daughters Naleigh and Adalaide and son Joshua, she's not taking any more unsolicited critiques. Katherine Heigl is done with mom shaming.

“Generally I try to ignore it, but when I hear little whisperings, there’s that moment of self doubt — ‘Am I doing something wrong? What have I don’t wrong?’" Heigl says. For example, when she admitted to drinking coffee during pregnancy per her doctor's recommendation, headlines like "Should Katherine Heigl Really Be Drinking Coffee During Pregnancy?" appeared. But she's over the judgement. "Every year I get older that voice quiets and quiets and goes to a place of: it’s none of your f*cking business and I’m doing just fine," Heigl says.

Heigl has learned to avoid reading comments on her social media, but sometimes the criticism gets back to her anyway. She described setting up a room in her rental house in Toronto, where she's filming Season 8 of Suits, for her teenaged niece and 1-year-old son to share. Fearing the baby would wake up if her niece came in after his bedtime, Heigl put his crib inside the walk in closet, leaving the door cracked open. She didn't think much of it until her dad told her that "the trolls on the internet don't like that," Heigl said. Troll-approved or not, when you have six people living in a three-bedroom condo, somethings gotta give.

No matter what people on the internet feel empowered to say, Heigl is at a point in life where she doesn't feel compelled to defend herself every time someone questions her choices. "I’m not any longer gonna respond to the negative ones. In my 20s I’d be like ‘Well I have something to say to this’ but I’m not gonna engage,” Heigl says. She learned the hard way that despite the endless comments intent on criticizing every decision, sometimes you just have to know that you're doing okay, and that's enough.

Heigl admits she's only human, and there are a few situations in which she feels it's OK to comment. For example if you actually believe what's going on to be a safety issue. We all just want each other's kids to be safe, right? Another scenario in which it's OK to comment, according to Heigl, is when it comes from a place of true concern, and is done thoughtfully. Heigl recently received backlash for posting a goofy pictures while visiting her brother's grave. She explained that she brought her two daughters to the cemetery to tell them about their late uncle and keep his memory alive. She was inspired by the memory of what she called his "irreverent sense of humor" and took a few silly shots, prompting commenters to criticize the now deleted post. While Heigl should be able to celebrate her brother's life however she chooses, she decided to respond because she felt people were respectfully expressing concern. Heigl says she's always taken pride in her ability to apologize, so she posted two videos on her instagram admitting that she maybe went to far.

The criticism becomes a problem for Heigl when it turns into superficial nitpicking and judging other moms, who are doing their best at the hardest job in the world. She advises comment-happy social media users to "take a beat, take a breathe, and ask yourself if what you’re about to say has any true value, or will really help at all." Heigl continues, "If not, keep it to yourself. I’m sure your grandmother said the same thing that mine did." Because lets face it, most moms subject themselves to enough guilt without the unhelpful comments.

“I don’t get the mommy shaming. I don’t get that. Where is that coming from? Just control, like ‘you should be doing it the way I’m doing it?’ That’s terrifying. Because nobody’s got a full on beat on this," Heigl says.

Like many new moms, when Heigl first had her daughter Naleigh, she was overwhelmed by the task ahead of her. "The insecurity of early motherhood for me was just like, all I can remember about my early 30s," Hiegl says. And while she's gained some confidence in her role as a mother over the years, parenting doesn't come with an instruction manual, so it's unsurprising that that sense of insecurity lingered. "As a mom, all I do is second guess and question my choices and my decisions. Am I doing this right? Am I doing this wrong?" Heigl says. Interestingly enough, what provided her some relief was going back to work.

Heigl stayed home for a little over a year after she gave birth to son Joshua Jr., but then she landed the role of Samantha Wheeler on Suits, and had to head to Canada to start filming Season 8. While leaving her family in Utah initially was tough, she discovered that she has far fewer doubts about her abilities as an actress than her job as a mother. "As soon as I walked onto set, there was this incredible relief that I know what I’m doing there. Like, there’s no question, I know what I’m doing and if I don’t there’s another person that can tell me what to do, and other people are making the big decisions, not me," Heigl says. Many working moms can no doubt relate.

While motherhood will probably always come with some level self-doubt, the strength it takes to keep marching, day after day, can inspire a type of confidence like no other. "Now I can play a character like Samantha with the confidence that I do ... because I found a place in my life of more confidence, more stability in my own skin, and less caring about everyone else’s opinions and judgements. It does still hurt my feelings on occasion, but I don’t seek it out because I know what really matters, how I feel about me.” Amen to that.