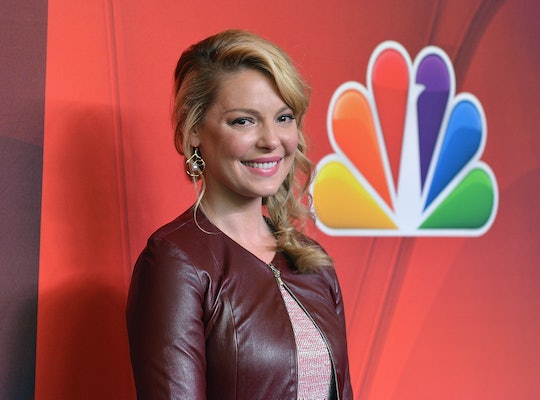 Katherine Heigl is not one to hold back while organizing. That is, at least, according to the actress and mother of one herself. Heigl and her mom, Nancy Heigl, joined forces to rid their wardrobes of old clothing and accessories. But these items weren't just thrown into a black garbage bag and dumped in a bin. This time, Katherine Heigl created a Poshmark closet to sell her previously work items for a good cause.

This is the second time Heigl and her mother have sold items on Poshmark. The first time was on May 8, when a number of glamorous items right out of Heigl's closet went on sale and were almost instantly sold to Poshmark users. That's no surprise, because even though Heigl is a full-time mom to Joshua Jr., Nancy, and Adelaide, she has kept a pretty impeccable closet full of red carpet clothing most of us can only dream of owning. That is until now, of course.

Although she admits to being "ruthless" when it comes to getting rid of things, Heigl revealed to Romper that giving up shoes has always been a bit difficult for her. At least until she got pregnant.

"The hardest pieces to let go of are shoes," Katherine explained via email. "I’m a shoe gal through and through and they are typically the last thing I clean out."

However, Heigl shared that things were different this time around because of how her shoe size changed from having children.

"They were the first to go since my feet grew a full size after pregnancy," Heigl went on. "I had no choice but to let go of some of my beloved shoes."

Unfortunately, that is the reality that many women are forced to face after pregnancy — a permanent change in shoe size.

Whether you are into Heigl's snakeskin flats, or you're more of a Louboutin bootie kind of mom, there are plenty of options to choose from in her Poshmark closet. The prices are relatively fair, too, considering that most of the items Heigl chose to sell were high-end luxury brands like Manolo Blahnik, Emporio Armani, and Michael Kors.

"I’m pretty fastidious about keeping my house and my closet clutter-free, so I do several clean outs a year. In the past, I’ve donated my clothes to local churches and women’s shelters, but when I found Poshmark through an Instagram post, I decided to check it out and see if there was a way I could use my closet clean-out to help my own foundation," Heigl explained further while discussing her decision to sell personal items online.

One of my personal favorites? The below J. Crew blouse, which is just beautiful.

The below shirt dress is also a big hit, especially considering that warmer weather has arrived in most parts of the United States. Plus, who doesn't love a dress tie to help cinch the waist a little bit?

While talking about ridding her home of old clothes, I couldn't help but ask Heigl if she would ever considering selling her maternity clothes — or any of her children's clothes once they've grown out of them. Heigl's response was much more excited than I expected, proving it's something she's definitely been considering.

"I would love to sell both! I have so many adorable pieces from Joshua Jr that he only wore once or twice because he has been growing so quickly," Heigl added, giving hope to moms everywhere for a chance to pick up some adorable baby clothes straight out of her own son's closet.

Heigls' Poshmark closet had 159 listings at the date and time this article was originally published on May 23. Make sure to check out what Heigl and her mom, Nancy, put together — and remember that it's all for a good cause!

The money will be donated to the Jason Debus Heigl Foundation, a non-profit dedicated to animal welfare. The organization was created to celebrate the kindness of a beloved son and brother.