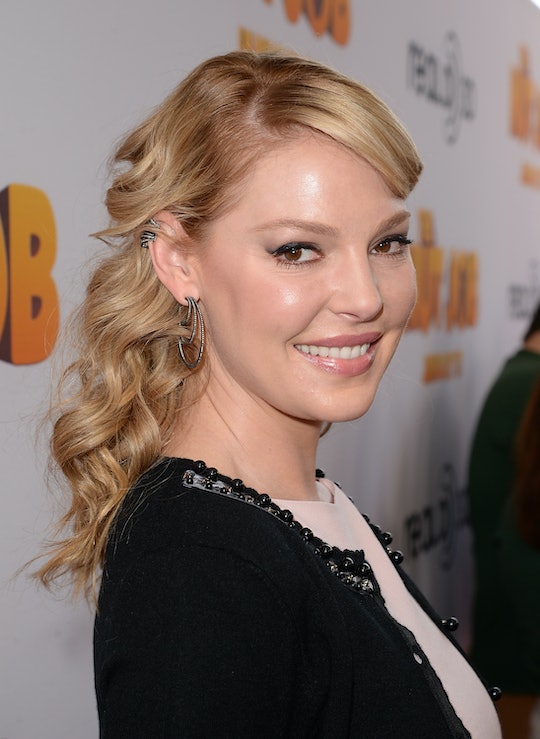 Actress Katherine Heigl has three children with her husband, musician Josh Kelley. Two of them are adopted, and their newest addition, Joshua Bishop Kelley Jr., was born on Dec. 20, so he's almost 2 months old now. Her two daughters, 8-year-old Naleigh and 4-year-old Adalaide, were adopted in 2009 and 2012. She and her husband have taken to outlets like Instagram to share stories about their family, and they've made it clear how much they love all of their kids. But in particular, Katherine Heigl's quotes about adoption are lovely, and her experience is a great example for other individuals and couples who are thinking of adopting.

Heigl has never shied away from talking about adoption, and the birth of her son hasn't changed that. In a recent interview with People, Heigl said the only real difference for her between adopting and giving birth in raising her children? The hormones.

One minute you’re weirdly obsessed with this baby, like ‘Don’t take him out of my sight,’ and the next you’re kind of blue, you’re a little sad and a little freaked out. I actually prefer the adoption way because I wasn’t subject to hormones.

But that was reportedly the only difference:

The moment you hold your child, you’re wholly in love. And you’ll do anything to protect them and shelter them.

But this isn't the first time Heigl has talked about her experience with adoption.

According to another People piece, Heigl told Scholastic Parent & Child:

Anyone who doesn’t have experience with adoption wonders, ‘Does love for a child come through DNA?’ I knew it didn’t.

They’re yours. You love them the moment they’re put into your arms. Josh had to learn that, but he was so gracious and accepting.

Adoption has never been a foreign concept to Heigl. Her sister, Margaret, was also adopted from Korea. She reportedly created the name Naleigh as a combination of Nancy, her mom’s name, and Leigh, her sister's middle name.

Previously, Heigl has stated that it's because she's had her sister in her life that adoption was important to her.

I wanted my own family to resemble the one I came from, so I always knew I wanted to adopt from Korea.

We have talked about having biological children as well, but we decided to adopt first. I just wanted to be a mom. So however we do that, it’s fine with me.

In an Instagram post, Heigl shared the People video above, and noted, "The girls were excited to discover they were going to have a baby brother, but very confused when I explained that I was pregnant and had to grow him first!!!"

The family is clearly thrilled with the new addition, and it doesn't matter how he joined them. Heigl in particular is obviously over-the-moon in love with her little boy.

"@joshbkelley caught me soaking up some morning baby love...❤️❤️❤️❤️" she captioned a recent Instagram post, featuring her and baby Josh.

But Josh might not be Heigl and Kelley's last baby. Apparently, in 2012 Heigl said she would like to have four children. “We were considering adoption again, fostering, or pregnancy if possible," according to a piece on celebrityinsider.org.

Clearly, adoption, fostering, and giving birth to a biological child is all the same in Heigl's eyes. It's all about love, in the end.