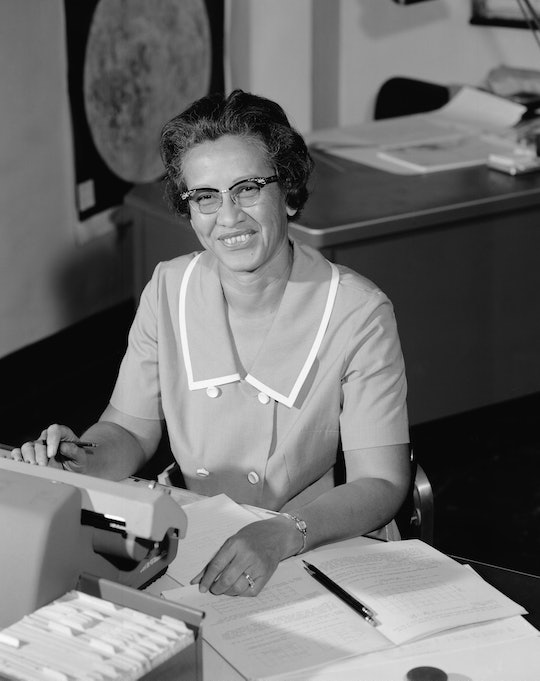 At the age of 101 years old, Katherine Johnson, the trailblazing mathematician depicted in Hidden Figures, has died. Johnson's important and inspirational work at NASA helped to shape the ways in which women and people of color are viewed in the world of science. "Today, we celebrate her 101 years of life and honor her legacy of excellence that broke down racial and social barriers," NASA wrote upon news of her passing.

During her time at NASA in the 60s, Johnson hand-calculated the trajectory for America's first trip to space, as CNN reported. She was a part of the team, primarily comprised of women, referred to as the "Computer Pool" that calculated data for space missions. Black women were an integral part of these human computer workforces that made possible NASA's missions to space.

Despite their important work, women like Johnson were largely segregated into the "West Area Computing," and forced to use separate restrooms — not to mention they received none of the credit for the work being done by their teams. Johnson was a trailblazer for equality at NASA, moving into the renowned Flight Research Division after being employed at NASA for just two weeks. From there, she powered her way into previously all-male briefings and on to the inner circle of the American Space Program.

As a part of the American Space Program, Johnson helped to map out the moon's surface ahead of the 1969 landing and aided the safe return of the Apollo 13 astronauts, according to NASA.

Johnson's work, and that of her team, was made famous in the 2016 book Hidden Figures, which was adapted into a film the following year. She went on to retire in 1986 and President Obama awarded her the National Medal of Freedom in 2015.

Following news of her death, NASA administrator Jim Bridenstine wrote on Twitter that Johnson "was an American hero and her pioneering legacy will never be forgotten." And though Johnson's time on Earth has ended, her impact on the world of science and the doors her work opened for other women and people of color will live on.