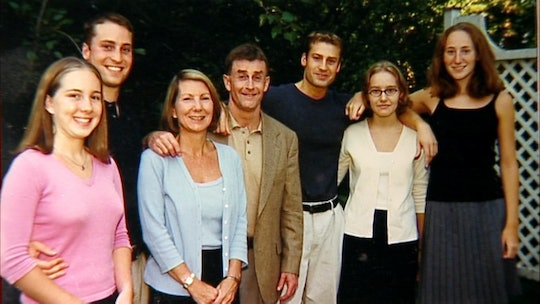 Netflix's 'The Staircase' Reexamines The Death Of Kathleen Peterson

In 2001, Kathleen Peterson was found dead at the bottom of the stairs in the home she shared with her husband, crime novelist Michael Peterson. Though her death was initially regarded as an accident, it was quickly assumed by investigators that there may have been other factors at play. Kathleen Peterson's cause of death has been debated for years, which is why the case has spawned two docuseries: the original The Staircase from 2004 and the upcoming Netflix series of the same name, which airs on June 8.

Michael was allegedly the last person to see Kathleen alive, and the one to discover her body. He called emergency services and said his wife had fallen down the stairs after an evening spent drinking outside; he also mentioned that she had taken valium. However, an autopsy revealed that there were unusual injuries on her body inconsistent with a fall down the stairs. It was determined that Kathleen died because of blood loss 90 minutes to two hours after she received several blows to the back of the head with a blunt object.

As Michael was the only one in the house with Kathleen at the time of her death, he was the main suspect. He was eventually convicted of her murder in 2003, released from prison in 2011 (according to The News & Observer) and in 2017 he pled guilty to voluntary manslaughter despite maintaining his innocence. A plea deal allowed him to walk free as a convicted felon on time already served. (Romper reached out to Michael Peterson's representatives and Netflix for additional statements.)

In his preliminary report, medical examiner Dr. Kenneth Snell determined that Kathleen's death was caused by the fall, but WRAL, a local news affiliate, reported that that was the conclusion he came to before the autopsy. It was later that he realized the extent of her injuries, saying, "She had some, I believe, bruising and abrasion on the front of her face. She also had some bruises to the backs of her arms, from the elbow down to the backs of her hands."

There were also gashes in the back of Kathleen's head, which neuropathologist Dr. Thomas Bouldin felt were consistent with her being attacked, according to WRAL. He thought that she had been lying in a pool of her own blood for hours as well because "this brain had experienced a period of decreased blood flow approximately a few hours before death."

All of those injuries didn't seem to track with an accidental fall down the stairs and after further examination, Dr. Snell believed Kathleen had been beaten. That was an opinion Dr. Bouldin seemed to share. But while blood spatter at the scene indicated a weapon was used to hit Kathleen, CNN reported that no such murder weapon was ever found.

Prosecutors argued that there was strain in the Petersons' marriage because Michael was bisexual and having extramarital affairs with men without Kathleen's knowledge. (Though it is impossible to say what she did and didn't know beyond Michael's claims.) They also theorized that Michael had killed her to collect a large life insurance policy. The defense countered that Kathleen had been well aware of his sexuality and that they were very happy together, despite his affairs.

Another theory about Kathleen's death involved a much more bizarre accident. Us Weekly reported that the Petersons' neighbor, Larry Pollard, thought it was possible that an owl attack might have caused her to fall down the stairs to her death; suggesting the marks on her head would then supposedly be because of the talons. A small feather was found in Kathleen's hair. It's a strange theory, but one that has followed the case for years.

Netflix's The Staircase will take another look at Kathleen Peterson's death and perhaps reach new conclusions; with the clarifying distance of time, who knows what a reexamination of the evidence may yield? Michael Peterson was convicted, but there are still so many questions about what exactly happened to Kathleen.