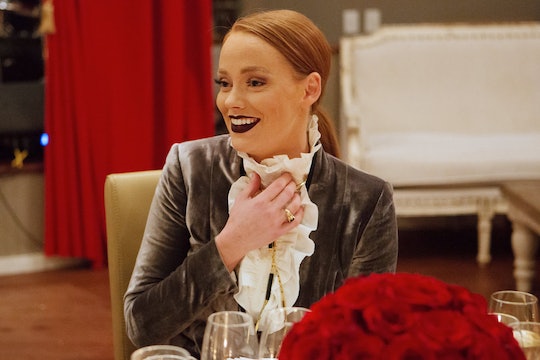 Why Kathryn Is Being Open About Her Depression On 'Southern Charm'

On Thursday night's episode of Southern Charm, Naomie Olindo and Danni Baird attempted to break into costar Kathryn Dennis' apartment when no one had heard from her in a week. Kathryn was thankfully fine, and when she explained on the show exactly why she had fallen off the map, I had to cheer for her. Kathryn opened up about her struggles with depression and fans loved how brave she was to share that.

For the first four seasons of Southern Charm, Kathryn had a reputation as a wild child and as a bit of a loose cannon. Her tumultuous relationship with Thomas Ravenel, the couple's two children, and Kathryn's struggles with addiction were frankly discussed and provided much of the series' most dramatic moments. What Charm fan can forget the image of Kathryn racing after Thomas on the pier into the night, her enormous fur coat flapping in the wind? But this episode was the first time Kathryn discussed her mental health and her struggles with anxiety and depression on the show. She explained that because she had been doing so well, she decided to try going off of her medication. But abruptly stopping medication the way that Kathryn did can often cause a sudden return, or even worsening, of depression symptoms.

Fans on Twitter were quick to praise Kathryn for her honesty and bravery in telling Danni about her depression on camera. Many were proud of Kathryn simply for the strength it took to be so open and vulnerable in such a public forum.

Other fans felt that they could personally relate to everything that Kathryn was telling her friends about her depression. In the episode, Kathryn said that going off of her medication increased her anxiety and emotions and that it "snowballed." She also said that she felt, in a way, ashamed. Twitter users were quick to say how much Kathryn's experience resonated with them. "The minute [Kathryn] said she deals with depression I immediately got it," one user wrote, saying that if you don't live with it, it can be hard to understand. Another Twitter user wrote that they had been where Kathryn was with regards to going off prescribed medication.

In an interview with Inquisitor, Kathryn opened up even more about why she withdrew so much for that week. In addition to abruptly going off of her medication, she was dealing with the deaths of her two grandparents as well as an emotionally painful encounter in Hilton Head with Thomas's girlfriend Ashley. And she didn't want to tell her friends about it for a very simple reason: fear of judgment. She said:

There is so much stigma around mental health and specifically depression, and there shouldn’t be. However, at the time, I needed to be alone with my thoughts and I didn’t know exactly how to broach that subject with my friends. I didn’t want them to judge me. I had been judged so much already.

It's true that Kathryn has always dealt with a certain amount of judgment and side-eye on the show. But now in the fifth season, audiences are seeing a new version of the reality star. As a longtime fan of Southern Charm, I have to admit that I'm enjoying the heck out of #NewKathryn. She's a devoted mother to her two children, calm in the face of drama with her ex's new girlfriend, and a truly supportive (and funny!) friend.

Most of all, I'm glad to see Kathryn being open about her mental health on the show, and I hope that others who can identify with her struggle will feel the stigma lessen — even if it's just a bit.