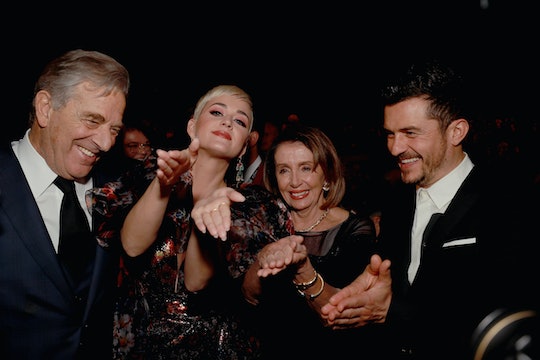 Katy Perry & Orlando Bloom Got Nancy Pelosi To Do Her SOTU Clap, & It's Epic

If you tuned into the State of the Union address on Tuesday evening, then you probably saw it — what many are referring to as the "clap heard around the world." Speaker of the House Nancy Pelosi was seated behind President Donald Trump for the duration of his speech. And although she was either deeply engrossed in reading something or rolling her eyes along with the rest of the Democrats, one statement by Trump actually elicited applause from her. (Just in the most sarcastic way imaginable.) Well apparently, Katy Perry and Orlando Bloom got Nancy Pelosi to do her SOTU clap again. And honestly, the photo is everything.

So you're probably wondering: What the heck was Pelosi doing hanging around these two celebrities, anyway? (It's kind of a random mashup of people to be together in one photo, right?) As People reported, the three crossed paths at the Los Angeles Convention Center. Dolly Parton was being honored with MusiCares' 2019 Person of the Year award on Friday, Feb. 8. At some point, Perry and Bloom stopped to pose for a photo with the Speaker of the House and her husband, Paul — as they recreated Pelosi's iconic clap with smiles on their faces. Take a look at a couple shots from this oddly satisfying moment in time.

As The Guardian reported, the original clap went down during the SOTU address after President Trump finally said something Pelosi could get behind. Trump had asked everyone to "reject the politics of revenge, resistance and retribution and embrace the boundless potential of cooperation, compromise and the common good," according to the publication. (Which is literally what the Democrats have been trying to do all along.) Cue: Pelosi rises from her seat and gives the POTUS an overly-enthusiastic round of applause.

Pelosi — with her clapping hands pointed directly at Trump and her lips pursed — instantly became a viral meme. That night, writer Patton Oswalt perfectly summed it up, tweeting, "Congrats to @SpeakerPelosi for inventing the 'f*ck you” 'clap. #sotu."

Another Twitter user wrote, "Trying to sleep and can’t stop thinking about Nancy Pelosi’s literal clap back," while also sharing images of Pelosi clapping for Trump when he served fast food at the White House, during Maroon 5's Super Bowl halftime show, and then actually during the SOTU address.

Another person tweeted a GIF of the infamous clap, writing, "When your man says he washed the dishes and needs to be praised. #PelosiClap."

Heck, even Pelosi's own daughter confirmed it was an "eff you" clap, according to The Hill. Christine Pelosi tweeted on Wednesday, "#waybackwednesday - oh yes that clap took me back to the teen years. She knows. And she knows that you know. And frankly she’s disappointed that you thought this would work. But here’s a clap. #youtriedit."

And yet, the Speaker of the House has insisted the gesture came from a place of sincerity. "It wasn't sarcastic," she told reporters on Wednesday, according to USA Today. "Look at what I was applauding," Pelosi added. "I wanted him to know that was a very welcome message."

Whether or not Pelosi's gesture came from a place of sarcasm, it was definitely among the most-talked-about moments from that night. And the fact that she was a good sport and decided to re-create the moment with Katy Perry and Orlando Bloom? Icing on the cake.