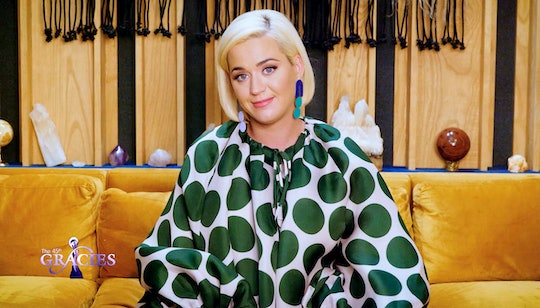 Although it's not uncommon for celebrities to use their platforms to help get out the vote, Katy Perry pumping breast milk in a voting PSA may just be the best use of puns we've seen yet. The 35-year-old Smile singer and new mom encouraged folks to get pumped to vote in a new PSA featuring fiancé Orlando Bloom lifting weights and a host of other celebrities getting pumped to exercise their right to vote.

"GET PUMPED TO VOTE!" Perry wrote when sharing the video on her official Instagram. "Okay so @orlandobloom and I have different views on what it means to get pumped these days, but whoever said pumping isn't a sport... I'd like to twist their nipples clockwise for one week straight."

At first glance the celebrity voting PSA resembles an '80s-style workout video. In it, Jane Fonda leads Perry, Bloom, Vanessa Hudgens, Kerry Washington, Amy Schumer, Ashley Benson, Ken Jeong, and Shaquille O'Neal in a Zoom exercise class. "We need you to be in shape for the upcoming race," Fonda said. "I need you to be strong! I need you to be laser-focused. I need you to be fully committed to the task at hand. So, let's get ready to exercise our right to vote!"

While Perry's celebrity pals opted to follow Fonda's lead and work out, Perry welcomed daughter Daisy only six weeks ago, meaning the new mom was probably not cleared to begin a fitness routine at the time of filming. Instead, Perry can be seen eating a protein bar and ogling Bloom as he lifts weights.

Still, the singer eventually finds her own way to get pumped — by pumping milk with her breast pump. "Get pumped to vote," Perry told viewers while hooked up to her breast pump. Later, an exhausted and frustrated looking Perry interrupts the group workout to ask Schumer, a fellow mom, about her son. "Amy, does your kid have teeth?" Perry asked. (Schumer's son, 16-month-old Gene, does in fact have teeth, for all those wondering.)

"I am going to exercise my right to vote," Perry wrote Monday on Instagram when sharing the video. "Especially if @JaneFonda says I should. We're getting in shape for the race of our lives this November and it has never been more important to #ExerciseThatVote."

The singer then encouraged her followers to check their voter registration status using the link in her bio because, as she cautioned, "many state registration deadlines are happening today."