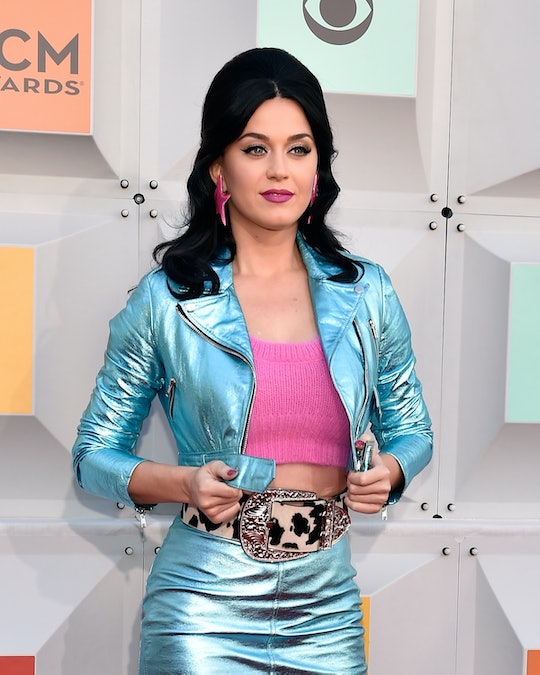 Sunday night's ACM Awards didn't just bring incredible moments, wonderful fashion, and the best of country's biggest and brightest; it also brought jokes on jokes on jokes. Katy Perry's jokes about Dolly Parton were a perfect example of humor done right: touching, hilarious, and a true honor to a woman who has re-defined a musical genre for us all.

As she was on stage presenting Parton with the Tex Ritter Award, Perry perfectly dropped the best joke of the night, saying,

I was just one tiny sequin on Dolly Parton's gown. Maybe we're cut from the same lamé. We're both known for some of the biggest... 'songs' — in our fields.

When women can not only support one another, but lovingly poke fun at one another with respect and admiration, well, that's the dream, you guys. That's the dream. Especially because, even though the joke was lighthearted, kind, and completely innocent, it also subtly highlighted the ridiculousness that clouds the music industry when it comes to female performances, female artists, the manner in which they are judged and (sadly) the manner in which they are remembered. Both Perry and Parton share 59 Grammy Award nominations between the two of them (yeah; trust me, I counted... twice), yet it seems that more often than not, it's their bust size people are intent on continually talking about.

Of course, that doesn't mean the self-made, undeniably talented women can't poke fun at one another because, well, if you can't laugh at yourself, who can you laugh at? As a matter of fact, Dolly has always been one to poke fun at her bust size, her choice to undergo cosmetic surgery, and her ability to stand the test of time, even if a scalpel or two had something to do with it. As a fellow woman and fan, I admire Parton's ability to stay completely true to herself and her enduring sense of humor in a culture that seeks to constantly undermine her and make her feel less than.

Which is why this moment in AMC history is something to be cherished and remembered. When women all over the world can start to own their own conversations — about beauty standards, body image, and the like — and take that power back to hone themselves with little apology and zero remorse, the world will be better for it (and definitely closer to obtaining gender equality). I think the biggest gift the ACMs brought us tonight was seeing women come together time and time again to cheer one another on, stand up for each other, and yeah, even crack a joke or two.