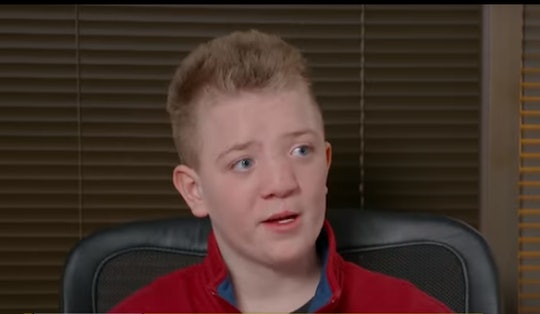 On Friday, in a tearful video, Keaton Jones asks a simple question: Why do kids bully? The 11-year-old boy from Tennessee is crying as he tells his mom, Kimberly, about his experience with middle school bullies. Jones received an outpouring of support from celebrities and regular folk alike after the video went viral. But now, because of controversial — and, to many, offensive — photos featuring Kimberly that have surfaced, Keaton Jones is reportedly facing more bullying. And the way Jones is now being treated on social media highlights a major problem: How children are easily — wrongfully — held accountable for their parents' actions.

As Jones' video racked up views, people who stood in solidarity with the middle school student began to dig into his life to learn more about him. What they've found in the process were controversial photos posted to Kimberly's now-private Facebook page of the Tennessee family with the Confederate flag. Soon, Keaton, his mom, and his sister, Lakyn, began facing a swift backlash, with some people on social media suggesting that the 11-year-old deserved to be bullied, according to CNN. Allegations have also been made that Keaton himself has used racial slurs, and that is what led to his bullying. (Romper's request for comment from the Jones family was not immediately returned.)

(Those were) the only two photos on my entire planet where I am anywhere near a Confederate flag. I've spent most of my life being bullied and judged because I wasn't racist.

People aren't exactly buying it, and with reason. The Confederate flag has a long, deep racist history. Many white supremacists wave the Confederate flag proudly, under the guise of it being a symbol of "heritage" and "the South." So, even if Kimberly Jones claims she isn't racist, she deserves to be called out for posing with the Confederate flag and posting those photos in the first place.

But Keaton shouldn't be bullied for the actions of his parents. No child should have to bear responsibility for what their parents do. He is just a kid, with minimal understanding of many of the complex topics debated by adults. Of course, he should be reprimanded in some way if he has parroted racists views. But those rumors are unverified.

What is known is how bullying destroys children. Nearly 50 percent of students in the United States reported being bullied at school, according to the U.S. Department of Health and Human Services. And kids who are bullied are more likely to experience depression and anxiety, health issues, and poor academic success, according to StopBullying.gov. They are also at risk of dying by suicide, though the link between bullying and suicide is complex.

Piling on Keaton for his mother's alleged views only exacerbates these effects. Of course, it's understandable why, according to CNN, some celebrities deleted their posts in support of Keaton (Rihanna replaced her post with photos of Rosalie Avila, 13, and Ashawnty Davis, 10, both died by suicide). But lobbing insults and saying he deserved to be bullied puts Keaton — and any child in his situation — at higher risk for the physical and mental effects that bullying causes in the first place.

It's Kimberly Jones, on the other hand, who should be held responsible for her posts and her allegedly racist photos. And it's Kimberly who, as many people of color have suggested on social media, should use this as a teachable moment to learn how the people who the Confederate flag harms are the same people who stood in solidarity with her son.