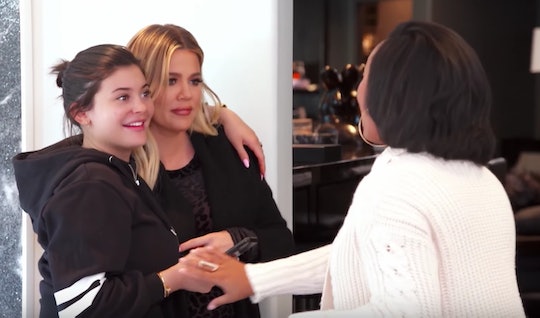 This year has been a wild year for the Kardashian family and their fans. In 2018, the family welcomed not one but three babies into the world, and saw their fair share of heartache, loss, and love. Needless to say, their life has been something that fans love to keep up with. So, when Keeping Up With the Kardashians went off air earlier this year, fans only had to rely on social media to keep up with the family members. Luckily, Keeping Up With the Kardashians is returning this summer, according to People, so fans can spend their hot days indoors keeping up with all of the exciting drama.

OK so, the trailer (which has since been removed from YouTube) for this upcoming season of KUWTK is only 30 seconds long but it still packed a punch. The trailer teased where the story of each family member is going this season with fake headlines projected behind them. According to the teaser, Kim's story this season will focus on her balancing spending time with her family while growing her makeup line, KKW, as well as focusing on her welcoming her third child, a daughter named Chicago this past January. "Things have really changed," Kim said in the trailer.

The best part about the trailer? Seeing the family back together again on camera. "There's like nothing better when it's all of us together," Kim said in the trailer. She could not be any more right.

The trailer also teased some pretty major events in the siblings lives — like Chicago's birth, Khloé's pregnancy in general (oh my god), and their Christmas card photoshoot — all of which fans saw play out on social media. The fact that fans will be able to see all of these things happen (slightly) in real time and even know the back story behind some of these very exciting events in the Kardashian's lives is quite possibly the most exciting news yet.

Not to mention, this teaser shows a glimpse at one very important person who fans hadn't seen on camera during last season of the show — Kylie Jenner. During season 14 of KUWTK, which aired earlier this year, according to Bustle, Jenner was absent for the majority of the season until she briefly appeared in the finale, comparing her pregnancy bump to Khloé's. But this was by choice. Jenner took a back seat from social media (and the spotlight) during her first pregnancy with her daughter, Stormi Webster. It wasn't until after Jenner had given birth to Stormi in February when she explained her reasoning for stepping away from the camera. "My pregnancy was one I chose not to do in front of the world," Jenner wrote on Instagram. "I knew for myself I needed to prepare for this role of a lifetime in the most positive, stress free, and healthy way I knew how."

But now that Jenner has obviously given birth and made her return back to social media, it's quite possible that fans will see more of her pregnancy or even Stormi in this new season of the show.

In case fans needed a quick refresher to get them excited for the new season, season 14 ended with Kim awaiting the birth of her third child and Khloé revealing the sex of her baby, according to The Cut. The majority of these scenes were reportedly shot in September and October, according to The Cut — far before Kylie, Khloé, and Kim's surrogate gave birth. So, fans of the show can only hope that this new season will show at least one of those things.

Unfortunately, a release date for the new season hasn't been revealed just yet — just that the show will return some time this summer. This gives fans something more to look forward to this summer that isn't heading to the pool every second that they can. Based on all of the exciting to happen in the Kardashians' lives this year, this new season of the show should be super interesting.