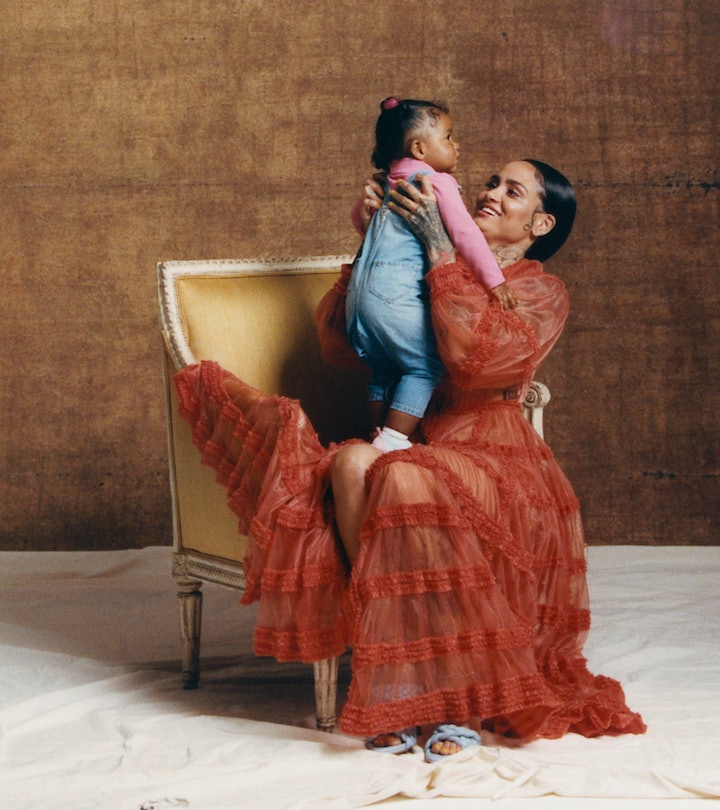 Among the many parents who want to be out on the streets marching with the Black Lives Matter movement is the singer Kehlani. "I can't show up for this protest because there's a lot of exposure to people and I don't want to bring a virus home to my baby," she told Bustle's Sylvia Obell for the August cover story, "but what I can do is go take care of the people who've been protesting." (The quintessential mom, she delivered bath salts and CBD to protesters.)

Kehlani says her 1-year-old daughter, Adeya Nomi has been an inspiration and anchor in a year marked by the deaths of three friends, and roiling scenes of police violence. The 25-year-old singer from Oakland told Bustle she is raising little Adeya to be an advocate, and that engaging with the work of activists as a mom is a part of that process. "I want her to be able to walk around here knowledgeable, to be able to feel confident that when she opens her mouth to teach somebody else that it's accurate," she said.

Amid so much trauma, spending time with family at home, and watching Adeya play, has become more important than ever. "That's what keeps me going," she told Odell. The two are pictured here in a gorgeous, previously unpublished photograph from the shoot by Micaiah Carter — Adeya wore dungarees. See the full-sized photo below.

Kehlani's May album It Was Good Until It Wasn’t went No.1 on the R&B Billboard charts, but she isn't focused on success. "I've been able to identify the difference between what is feeding my ego and what is feeding my soul," she told Bustle. "Understanding that I feel fuller longer after things like seeing my family on holiday versus how I feel after I buy myself something."

She's also looking out for other people's kids, calling out those who claim to support Black lives, but promote homophobia and transphobia: "How do you, in the same breath, say, 'Black Lives Matter,' then get in the f*cking Shade Room and your first instinct is like, 'F*ck Dwyane Wade's kid?'" she asked.

You can read the full interview on Bustle.