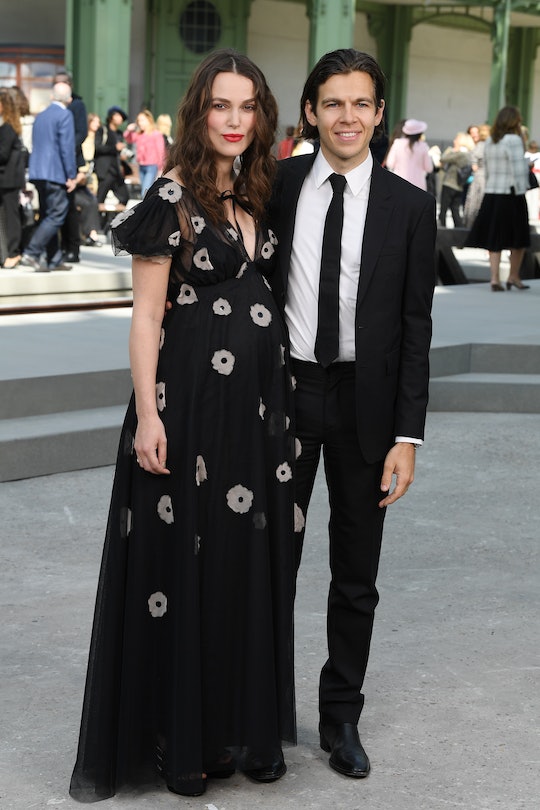 Keira Knightley Is Expecting Her Second Child With James Righton

Break out the celebratory balloons and confetti! Keira Knightley is expecting her second child with James Righton and her growing baby bump is too cute. The actress revealed that she was pregnant with baby No. 2 at the Chanel J12 cocktail party, according to Page Six.

Knightley, 34, arrived at the event in a cream and white gown that showed off her growing belly, the outlet noted. She paired the look with matching heels. Righton was by her side throughout, wearing a black suit with a black button down shirt underneath. He and Knightley held hands as they made their way through the Chanel J12 cocktail party, a photo snapped during the event revealed. The Love Actually star was photographed cradling her bump at one point during the fashion event, Page Six reported. She did not comment on her pregnancy during the event, and hasn't said anything since. It's unclear when the child is due.

She and Righton, 35, welcomed their first daughter in May 2015, according to People. Several sources confirmed the arrival of the couple's daughter, though Knightley and her husband stayed quiet about all things baby for the most part. People reported that Knightley was pregnant in December 2014, but the actress never confirmed the news in a statement or interview. She simply let her bump do the talking, like she appears to be doing this time around. It was later revealed that the couple named their daughter Edie Knightley Righton, as noted by E! Online. She arrived two years after the couple tied the knot in the South of France.

Knightley has been private about her experience as a mother for the most part, though she did speak with Harper's Bazaar about the impact it had on her acting career. The Pirates of the Caribbean star told the magazine she had to develop a "sense of, like, I don't give a f*ck" to fully step into her role as a mother. She told Harper's Bazaar that translated to her acting career, noting that nothing could embarrass her after experiencing "the messiness of" motherhood.

"Once you've had that whole experience of leaking breasts everywhere and the messiness of it — there's not control, it's animalistic. I feel that in a funny way with acting it sort of helps; there is no embarrassment any more," she said.

She spoke about motherhood once more in an essay published in Scarlett Curtis' book, Feminists Don't Wear Pink (And Other Lies). The letter would become controversial, as Knightley said she wasn't moved by Kate Middleton's public postpartum appearance, and other behaviors, after the arrival of Princess Charlotte. The essay was titled, "The Weaker Sex," and in it Knightley compared her appearance after birth to that of Middleton.

"She was out of the hospital seven hours later with her face made up and high heels on," she wrote in the piece. "The face the world wants to see. Hide. Hide our pain, our bodies splitting, our breasts leaking, our hormones raging. Look beautiful, look stylish, don't show your battleground, Kate."

Knightley later clarified what she meant, and accused the media of misrepresenting what she said, according to the Irish Examiner. She suggested that critics go back and reread the essay.

"I think it's very interesting that certain parts of the media have, I don't want to say purposefully, but let's just say misrepresented my meaning and exactly what I said," she said. "So I would suggest to those people in the media that they reread the entirety of the essay and not just take one bit out of it because the comments that I made are completely about our culture that silences women's truths and forces us all to hide and I absolutely did not shame anybody in anyway, in fact quite the opposite."

This time around, fans shouldn't expect to hear much about motherhood from Knightley. Aside from the few instances mentioned, she seldom shares about it and is unlikely to start. Still, fans are excited about the impending arrival of her second child.