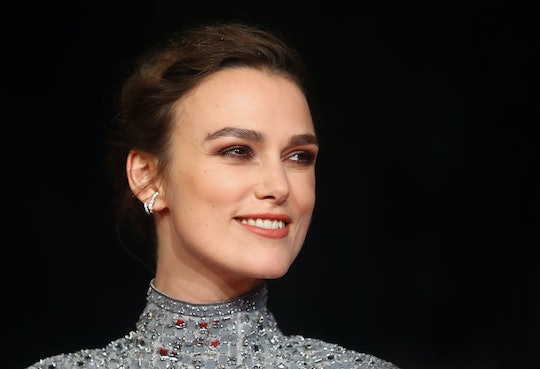 Keira Knightley Reveals Baby No. 2's Name & It's So Pretty

Earlier this month, fans learned Keira Knightley welcomed her second child with husband, James Righton. Knightley didn't share the news until six weeks after the birth, which is completely reasonable considering it's really no one's business. And two months after the arrival, Keira Knightley revealed her newborn's daughter name. Spoiler alert: It pairs perfectly with her oldest daughter's name, Edie.

Knightley first confirmed her second baby's arrival in an interview for BBC Breakfast, joking to interviewer Louise Minchin, "You can tell I’ve got a 6-week-old baby, haven't you?" She also admitted to feeling hazy after the birth (sounds about right, no?), sharing, "I’m talking, but I’ve got no idea where I’m going... This is about the third time since I gave birth that my hair has been brushed, and I didn’t brush it."

The actor's candid admission was followed up with another big reveal, this time with the mom sharing baby number two's moniker in a conversation with The Telegraph. As the outlet noted, Knightley's newborn girl is named Delilah. Aww.

In case you're wondering, Delilah peaked in popularity in 2016 and is of Hebrew origin, according to The Bump.

Cute name aside, the star of such classics as Pirates of the Caribbean and The Imitation Game has been open about the difficulties of motherhood in the past. “I don’t think we give women enough credit for the physical and emotional marathon they go through when becoming a mother,” Knightley told Balance magazine earlier this year.

She also noted how, even with all of the support, she still faces difficulties. “I come from a place of amazing privilege. I have an incredible support system; I’ve been unbelievably lucky in my career; I can afford good childcare, and yet I still find it really f***ing difficult," Knightley said. "It doesn’t mean I don’t love my kid, it’s just me admitting that the sleep deprivation, the hormonal changes, the shift in relationship with my partner, are all things that make me feel as if I’m failing on a daily basis."

With her last pregnancy, perhaps knowing what the toll would be, she originally planned to take six months off. But when she learned Official Secrets, her new project, was premiering in her native U.K. right after the baby's due date, she had to get a plan in place. "The pump is with me It's fine," Knightley explained regarding how she planned to juggle it all, including breastfeeding, according to Us Weekly. "If I don't do it my boobs will explode."

Although all of this juggling sounds stressful, Knightley is one to look on the bright side of things. Case in point: She finds sleep deprivation helpful. "The weird thing with acting is that sleep deprivation basically makes your emotions very close to the surface," Knightley explained, according to E! News. "It's much easier to cry. You feel like crying all the time, so I can turn that on like that, so this is great. Thanks kid."

Ha! It sounds like Knightley will adjust to two kids just fine. So here's to Delilah and Edie, aka the most adorable pairing of names.