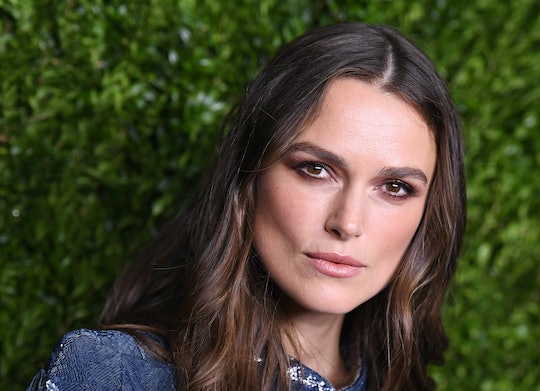 Keira Knightley Says Her Daughter Swore When Trump Was Elected, & It Totally Sums Up 2016

Little kids are unpredictable and we never know what they'll say next, but occasionally they also seem to hit the nail right on the head with their honesty. And just like with adults, sometimes a swear word is the only way to convey a certain sentiment. Keira Knightley says her daughter swore when Trump was elected and it kind of summed up 2016 perfectly.

The British actress, most well-known for her roles in the Pirates of the Caribbean franchise and Pride & Prejudice, talked with the host of The Jonathan Ross Show on Wednesday night about life with her daughter, 19-month-old Edie.

Edie is Knightley's daughter with husband, James Righton, and has been “talking a lot, she’s running, she’s literally repeating everything we say so we’re having to be really careful," Knightly told Ross, according to People. Anyone with a toddler knows that you definitely have to be careful what you say, because they're liable to repeat you. Knightley figured this out when she and Edie were watching election coverage after Donald Trump won the presidency, according to the Telegraph:

She’s like this watching the television, completely silently and totally still for about four minutes and she rolls over onto her back and she closes her eyes and she goes, ‘F*ck'!

Little Edie was fast asleep when the election results were coming in, but her reaction as she watched Trump's victory speech echoed a lot of people's feelings the morning after. Knightley laughed about her toddler's reaction, even though it involved adult language: "I'm very proud", she told Ross.

Even if Edie's reaction was totally justified, parents often worry about their toddlers picking up swearing or other language habits that could be considered problematic once they start school. By age 2, most toddlers are using around 50 different words and learning more and more each day. Since they're primed to be learning speech, they listen to what the people around them are saying, so those 50 new words often include swear-words, or words parents would prefer their tots didn't use.

By the time a kid is 4 or 5, and getting ready to start school, they're also going through some developmental changes that make them more aware of how adults react to them. This "testing" might include swearing — especially if the first time they do it, they get a rise out of their parents. It can be a difficult situation for a parent to navigate: overreacting can make it more enticing for a kid to keep using the word, but under-reacting prevents the child from understanding why the word isn't to be used — at least in public.

Some words that might be considered the lighter alternatives to swears — like butt or poop — are just funny to little kids (and adults, let's be honest). As children develop a sense of humor, words that are expletive in nature are exciting, intriguing, and teach them a lot about expressing emotion.

While most tots haven't developed the ennui around politics, as demonstrated by Knightley's daughter, they are likely to act out reactions that they see their parents or other adults have in stressful situations. Children are learning, by watching and listening, how to react to the world around them, and as they learn they're likely to try out what they see. Sometimes imitation is the greatest form of flattery, and certainly it's an opportunity to teach kids about their developing emotional lives.

If your child is as tuned-in as Knightley's daughter — or those little girls from FCKH8's viral Potty-Mouthed Princesses PSA — it's also OK to let them know they don't have to be too stressed out about politics just yet. At least not until they're old enough to vote.