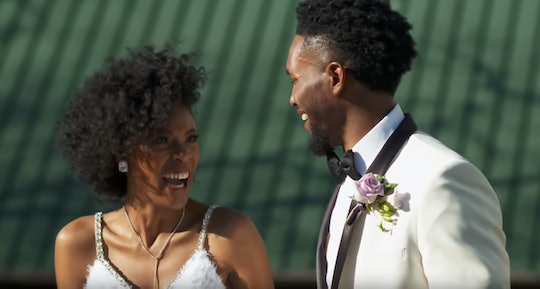 Keith & Iris Are Honeymoon Bound On 'Married At First Sight'

Like almost every relationship on Married at First Sight, newlyweds Keith and Iris faced some awkward physical post-wedding moments. Iris revealed to Keith that she’s been saving herself for marriage, and understandably, she wants to take things slow. But now that Keith and Iris are going on their honeymoon on Married at First Sight, fans are wondering if they’re going to take their relationship to the next level.

In a preview for Episode 4, titled “Stranger Love In Paradise,” the couple seems to be having a great time on their Antigua honeymoon vacation. They’re seen romping in the ocean and enjoying the beach, but Keith still seems confused about Iris’ perception of intimacy. “There’s questions that I have for her when it comes to intimacy,” Keith says in the clip. “How do you define sex and what does it mean to you?”

Later, while the two are relaxing on a hammock at the beach, they have a conversation about what “sex” means to Iris. “You can’t say sex,” she tells Keith. “There are different variations of sex.” That sparks a question in Keith’s mind about what previous sexual experiences Iris had in the past, and he asks her if she’s “done other things.”

From the beginning of the season, Iris’ virginity has been at the forefront of their story, and in an interview with Married at First Sight Unfiltered host, Jamie Otis, Keith said he was "mind-blown" when he found out about it at the wedding. He also admitted that marrying someone that is sexually inexperienced comes with some unexpected challenges.

"I think it does bring some concerns, I'm not going to lie, because I know that a big part of relationships and building relationships and maintaining a marriage does involve sex," he explained. "It involves being physical and intimacy and all things like that. So, this does kind of show a little bit of inexperience. And I'm just trying to figure out how to go through that because I know it's going to take a lot of patience.”

But so far, Keith has been really patient and respectful of Iris’ life choices, and he told Otis that it’s given him time to get to know her without any distractions. "I think this is why my wife ended up being a virgin,” he said. “I just feel like it was designed this way. And this is going to take a new approach for me, one that I've never taken before, which is just really, really, really getting to know somebody on a way deeper level before even considering the thought of physical intimacy."

With an unconventional premise like Married at First Sight, it’s hard to predict whether or not a couple will last. But from the looks of it, Keith and Iris have a strong connection and mutual respect for each other, and assuming nothing bad happens on their honeymoon, I think the pair can make their marriage work.