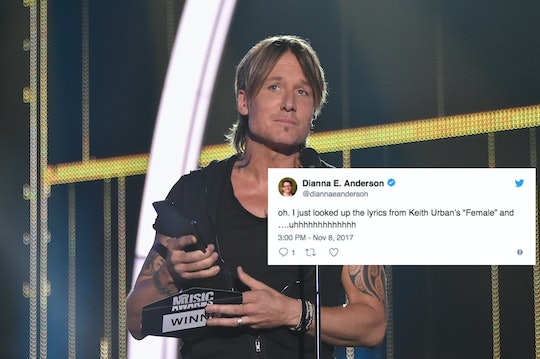 In today's edition of "Sh*t women didn't know they needed but are ever so *lucky* to have," Rolling Stone reported that Keith Urban released a song called "Female" in response to the growing number of women who have accused Harvey Weinstein of sexual harassment or assault. My first thought on this was, who in the hell still refers to women as "females" in 2017, outside of biology professors talking about mating rituals? But my second thought was no, thanks, I'm OK, Keith. I can go without "Female" and not lose an hour of sleep, not only because it was performed by a man and simply repeated all the hardships women already know they face, but also because it's being produced within a genre that has sexualized and debased women, contributing to a culture where such a song needs to exist in the first place.

You might think I'm overreacting here, because it's "just a song," but hear me out, because I'm coming at this not only as a feminist who has had enough of men dominating conversations about women's sexual abuse, but also as a southerner who grew up with country music playing in the background of my life like a mid-2000s Miley Cyrus film.

First, an update on Weinstein. Since Friday, 57 women have accused Weinstein of sexual misconduct, with the allegations ranging from inappropriate language to harassment to sexual assault, according to Entertainment Weekly. Weinstein has admitted to sexually harassing women, blaming the culture at the time, and settled lawsuits with a few of his alleged victims, according to The New York Times. But his lawyer denied any allegations of sexual assault, and his former representative said some of the harassment accusations are "patently false," according to EW. Weinstein's representative did not respond to Romper's additional requests for comment.

Fifty-seven women is a lot, obviously. And as more and more of them have come forward, more men in Hollywood have been speaking out and promising to be better advocates for women. And that's valuable, because — even though men are victims of sexual abuse, too — most sexual violence is perpetrated by men. Men's voices will be critical when it comes to calling out other men who might make rape jokes or make a disgusting comment about a woman at a bar. But the one place men shouldn't step in? Speaking in place of survivors. When it comes to the Weinstein scandal, it's great for male actors to acknowledge what they can do to make Hollywood safer, but what they shouldn't do is assume that they know what it's like to be one of Weinstein's alleged victims — or what it's like to be a woman in the U.S., generally — rather than elevating a woman's own story.

Women get this a lot. I've had men tell me of my sexual assault, "Well why didn't you just get up and leave? I would have kicked him in the nuts." OK, thanks, Fred. Or we'll even get men's unsolicited opinions about street harassment: "They're not doing anything. You need to stop being so sensitive."

Something doesn't need to be a problem for men, or be offensive for men, in order for it to be offensive or problematic to women (or any other gender). And women are tired of needing to have their problems acknowledged by men in order for them to actually be addressed. Enter, Keith Urban, who is going to perform "Female" at the Country Music Awards Wednesday night. According to Rolling Stone, the song is well-intentioned. It was written by two men and one woman, but, that issue aside, Urban is going to dedicate it to the women in his life and all the sexism they face daily. Great. But what Urban told Rolling Stone was less-than-great:

It affected me not just as a husband but also as a father of two young girls, and a son. I had a heart reaction – my first thought was that it was a gospel soul prayer mantra, all rolled into one.

I understand that knowing someone affected by marginalization makes you feel more personally invested in a cause — it makes sense. But it's a problem. You should not need to be a father or a son or a husband to want safety and equality for women. I don't need to have a relative who has died from cancer to donate to a cancer research fund, and I don't need to know a transgender person to be involved in stopping violence against trans people — I should do these things because it's the right thing to do. Unfortunately, the chorus of "Female" just perpetuates this idea that you have to have a connection to women to appreciate them. Here's what it says:

Not only is this description of women incredibly shallow, Urban is perpetuating sexist tropes that contribute to inequality. "Virgin Mary, scarlet letter, nature, fire, suit of armor" only further contributes to the "cherished woman" trope.

Women are tired of hearing that it's their connection to men that makes them valuable and worthy of songs or fundraisers or hashtags. Don't combat rape culture because you have a sister — do it because rape is wrong and it's a violent crime.

Though it sounds like Urban means well, I wish he and his songwriters had named the song "Being a Better Man" instead of "Female," since he is a man. Women can share their experiences about their own lives, and we should elevate them when they do. We don't need men to parrot those same experiences; rather, what we need is for them to acknowledge what they're going to do so that women stop having these bad experiences. I don't want to hear a song about the shitty things that women deal with, because I, and a lot of other women, live it daily. I especially don't want to hear it from a man. I'd love to hear Keith sing a song, though, about being a man, and breaking down the toxic masculine tropes that lead the women in his lives to face hardship. Toxic masculine tropes that are perpetuated by his own industry.

Country music is well-known for being sexist and for mistreating its women artists. Rolling Stone did a separate piece in July about how sales of Miranda Lambert's The Weight of These Wings are a sad example of sexism in country radio. The Dallas Observer also noted that country music refers to women with the infantilizing term "girls" and constantly reduces them to their "long, tanned legs."

Take this popular song "Must Be Doing Something Right," by Billy Currington, which I used to listen to, that starts off with "A woman is a mystery a man just can't understand," perpetuating the trope that women are strange, confusing creatures that you couldn't possibly just communicate with like a normal human.

Or how about "Rough & Ready," by Trace Adkins, where the lyrics say, "Got a 'what-are-you-looking-at-pretty-boy' smirk," perpetuating the idea that men who don't fit traditional ideas about masculinity are weak and lesser than. Let's check out the next few lines:

Ain't one thing about her fake

Oh, goodie! Jokes about how women who have elective plastic surgery — a trend that developed because of unrealistic beauty expectations created by men. And then it goes:

She's long and tall, and she goes great with

Oh, yes, I love it when I can supplement men's meals like a side of fries. And this is a general trend in recent "bro country" music. One critic wrote for the Los Angeles Times that a lot of popular country music written around and since 2010 is made up of "interchangeable songs about dirt roads, pickup trucks, girls in tiny cutoff jeans, and beer, lots of beer,” according to the Pacific Standard. (Notice the writer even said "girls" not women.)

Country is treating women like sh*t. I'm glad that Urban is trying to change that with "Female," and, according to Rolling Stone, Chris Janson released "Drunk Girl," which is about rape culture, and Luke Bryan released "Most People are Good," in support of the LGBTQ community. So, progress is happening. But, rather than repeating the struggles that women face daily and criticism survivors hear, like "she was asking for it" — which is a lyric in "Female," according to Rolling Stone — I would love for men in country like Bryan to write songs about what they are doing to change.

I appreciate the sentiment of "Female," but I'd like the men of country to call out their own industry for its objectification of women, which leads to them being treated like sexual side dishes that you load into your truck as a symbol of what a great man you are. Then they need to write songs about how they‘ll change. It's bigger than Weinstein. Country music culture is yet another reason that a song like "Female" even has to be written — and that it's performed by a man.