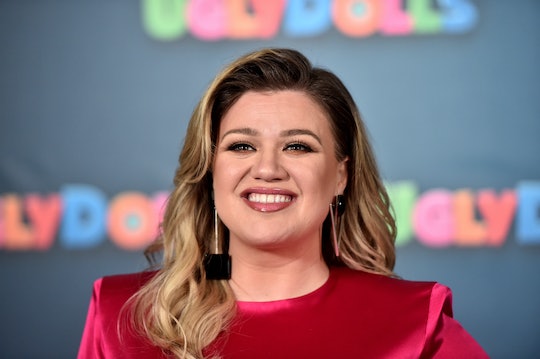 When it comes to the holidays, parents often bust their butts in order to provide the perfect, "magical" experience — only for some make-believe character to then take all of the credit. I'm talking about Santa Claus and his sleigh filled with toys, the Easter Bunny and the candy-filled baskets, and even the Tooth Fairy with her wads of cash. We make up these elaborate tales of animals/old men/winged ladies traveling all across the world to deliver goodies to children. It's kind of absurd, if you think about it. However, Kelly Clarkson doesn't let the Easter Bunny take credit for her kids' baskets. And it makes total sense.

In case you lost track, the Voice coach has two children — River, 4, and Remington, 3 — with her husband, Brandon Blackstock. And apparently, Clarkson is having none of the Easter Bunny stealing all of the glory. Because she went ahead and told her preschoolers the truth: Mom and dad are the ones who put out the baskets for them on Easter morning. "Even my nanny came in this morning and was like, ‘What did the Easter Bunny bring?’ And I was like, ‘Wait what?'” Clarkson told People. “I kind of just was like, ‘Mommy and daddy did these for you.’ I knew my mom always did it — maybe don’t show this to children.”

I thought Easter was for us. Sometimes I’m tired of giving credit to non-existent things. Like I’m very busy, and I took the time to shop at Target and put this all together. I did this — no bunny! They got chocolate, so they’re fine.

Makes sense to me. Because honestly, the Easter Bunny is creepy AF. First of all, why is the Easter Bunny the size of a person anyway? And why aren't there more human-sized bunnies out there? How did the whole bunny tradition get started anyway? (We can actually thank German immigrants, as it turns out.) Honestly, I could happily do away with the Easter Bunny nonsense, and have zero regrets.

Clarkson's stance in support of "spoiling" the holiday magic may not be the popular opinion. But then again, Clarkson tends to do things her own way — and she isn't sorry. Back in January 2018, the former American Idol contestant revealed her controversial stance on spanking, Us Weekly reported. "I'm not above a spanking, which people aren't necessarily into," she told 98.9 The Buzz in Rochester, New York. "And I don't mean like hitting her hard, I just mean a spanking. My parents spanked me, I did fine in life, and I feel fine about it. But I do that as well, too." (For the record, the American Academy of Pediatrics (AAP) strongly discourages it.)

Spanking aside, I see nothing wrong with the way Kelly Clarkson approaches Easter. My family isn't religious, but we do participate in secular Easter traditions — including the Easter Bunny. Not enthusiastically or anything. It just sort of happened with our oldest, so we went with it. These days, our 7-year-old knowns it's was all a sham. (He asked several times when he was 6, so I finally told him.) However, my 5- and 3-year-olds are still believers.

As much as I'm just "meh" about the whole ruse, you have to admit: Threatening that Santa/the Easter Bunny won't bring them anything is a highly effective way of convincing kids to stop acting like jerks. So I think I'll continue milking this tiny bit of leverage for as long as possible.