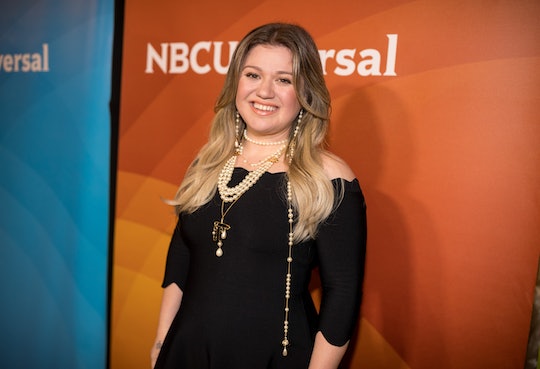 Kelly Clarkson Says "Wine Is Necessary" To Raise Kids, & Here's Why That Joke Should End *Now*

Kelly Clarkson is definitely the kind of celebrity I'd want to have as a mom BFF. She's funny, down-to-earth, super dedicated to raising her kids, and doesn't seem to even sort of care what other people think of her. And in contrast to some celeb moms, whose Instagram-perfect lives seem to suggest that their kids always behave, and happily eat things like organic kale and chia seeds without complaining, Clarkson isn't at all afraid to be honest about the everyday challenges of motherhood. On Tuesday, Kelly Clarkson said "wine is necessary" when raising kids, according to People, and it's one of those jokes that has more or less become a reassuring shorthand for, "trust me, my kids can be jerks, too." That's a sentiment that's totally validating, because the ups and downs of parenthood are something we all struggle with sometimes. But while Clarkson's "moms need to drink" line was clearly well-intentioned, it seems like it should be time we finally agreed that those jokes aren't actually all that funny.

Clarkson spoke about raising four kids — her 3-year-old daughter, River Rose and 21-month-old son Remington with husband Brandon Blackstock, as well as Blackson's children from his first marriage, Savannah and Seth — during a TCA panel for the upcoming season on The Voice, on which Clarkson will be a coach. And a lot of what she said was seriously relatable: she spoke about the way children "call you out" on your behavior, and the fact that "kids teach you to be a better human." She also discussed her hopes for her kids, like the fact that she wants "to teach my [them] to do what they love," and that she hopes they will "see their parents as successful, loving and respectful people."

It definitely sounds like Clarkson's family life is her number one priority, and her insights are right on the money. But the problem with the "moms need wine" meme culture that seems so pervasive in parenting circles is that it makes light of the fact that alcohol is still a drug that many women can't safely regulate. That doesn't mean that drinking wine is bad, or that mothers shouldn't enjoy a glass of wine here and there just because they have kids. But perpetuating the joke that wine is the perfect antidote to the stress of motherhood makes light of the fact that it can also lead to some major issues — and it can make it that much more difficult for women who do need help to even realize they have a problem.

That's something that definitely concerns alcohol and drug addiction expert Dr. Howard Samuels, who runs an addiction treatment center in Los Angeles. As Samuels explained to The Huffington Post,

Young mothers are already under so much pressure and stress concerned with having a baby. They are isolated, hormonal and sleep-deprived since they have to wake up every three to four hours to nurse ... And we want to teach them and their children that the way to relax is through alcohol?

That might not be a problem for anyone who has no problem drinking in moderation, but it's something that still needs to be taken seriously. According to The National Institute on Alcohol Abuse and Alcoholism (NIAAA), an estimated 26,000 women in the United States die each year from alcohol-related causes, and about 5.3 million women in the United States drink alcohol in a way "that’s considered dangerous to their health, safety and well-being," according to DrugAbuse.com. And although problem drinking can affect anyone regardless of gender, women face some specific risks: women are more likely than men to binge drink, and, in general, alcohol is more likely to affect women more than men, since they often weigh less, and since women "have less water in their bodies than men do, and alcohol resides predominantly in body water," according to NIAAA.

Alcoholism can also lead to serious health issues, particularly for women — female drinkers are at a higher risk than men for liver damage, heart disease, and breast cancer, according to NIAAA — and, of course, alcoholism doesn't just affect the individual, but their families, too. The incidence of Fetal Alcohol Spectrum Disorders (FASD) in the United States is thought to be as high as 20 to 50 cases per 1,000 births, and beyond that, an estimated 10 percent of children in the United States live with a parent with alcohol problems.

Writer and mom-of-three Stefanie Wilder-Taylor opened up about her own experience with alcoholism and mommy wine culture in an essay for the Seleni Institute, and in it, she spoke to the heart of what many moms struggle with. Wilder-Taylor wrote,

[When] you're raising tiny human beings, drinking can easily become the default way to unwind. Alcohol is a reliable stress reliever that's readily available and socially acceptable. ... There's a reason all those drinking mom memes make the rounds on Facebook: 'You're not really drinking alone if your kids are home!' or 'The most expensive part of having kids is all the wine you have to drink!'

But as it often does, Wilder-Taylor admitted that alcohol quickly became something more than just a harmless motherhood stress reliever:

When my first daughter was born, I developed postpartum anxiety (although I didn't know it at the time). I was consumed with the enormity of keeping this little baby alive. ... To deal with these feelings, I upped my wine. I felt I deserved it, and I desperately needed a way to unwind. It's not like I could run off to the gym or go get a massage or a pedicure.

Ultimately, Wilder-Taylor recognized the severity of her problem, and sought out recovery in a 12-step program. But with more and more marketers targeting wine-drinking mothers with motherhood-inspired wine brands, and the growing general assumption that drinking should be a normal part of motherhood, the line between safe and problem drinking can easily become blurred.

Clarkson's "wine is necessary" joke was clearly just that — a joke — and it seems safe to assume she wasn't intending for it to be an endorsement of drinking too much when you have kids. It does make total sense, after all, that unwinding with a glass of wine after a long day spent with screaming kids would seem to like a totally appealing way to relax. But alcohol still comes with many risks, and "moms and wine" culture can gloss over that fact to the detriment of many women and their families.

While there may be nothing wrong with enjoying a drink or two here and there, the notion that women deserve alcohol as a way to cope with parenting stress is one that we don't really need to keep repeating. At best, it's a tired cliché. And at worst, it could cause real harm.