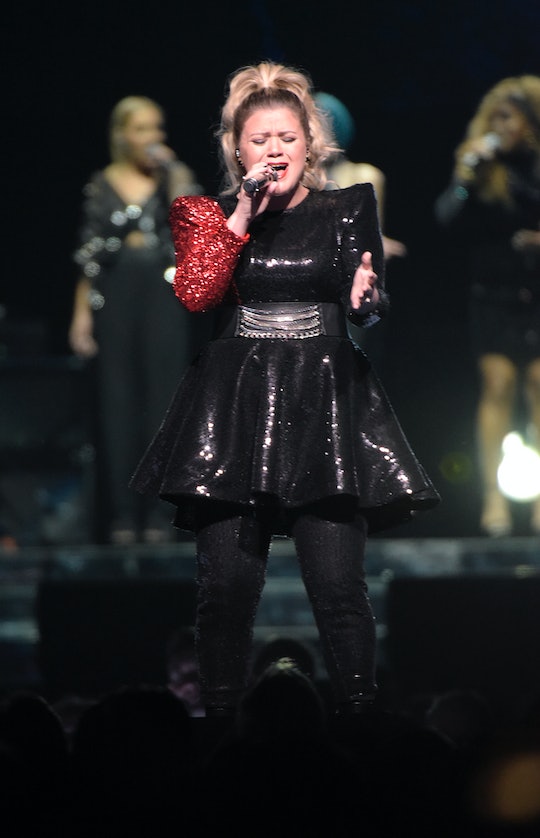 Kelly Clarkson's tunes have spanned all emotions, but one of the singer's own hits reduced her to tears in a weekend performance. In fact, the ballad "Piece by Piece" left such an impact, Clarkson struggled to finish the song about growing up without her dad in front of her own kids.

While in Los Angeles as part of her Meaning of Life Tour, which began on Jan. 24, the Grammy winner included the autobiographical hit, which digs deep into Kelly's feelings of abandonment after her parents divorced, and her father's subsequent lower-profile in her life, as website One Country reported.

"Sorry guys, I've been fine the last two shows, but my kids were at this one," she said, talking to the crowd. "Once you have kids ... I can't even fathom about not sticking around and caring. I just can't."

The 2015 song, which was also the title track of the album she released, was actually an easy one to write, following a conversation with her sister about her childhood, the singer told Glamour magazine that year.

"I had [my daughter] River, and even from holding her the first day, I was like, how could anyone walk away from that?" she recalled. "Then I started thinking that my husband is such a great father ... He changes diapers, he stays up, and if I've had a late night, he'll wake up with her in the morning."

"I was talking to my sister on the phone about how sometimes girls with daddy issues don't find men like that! You find men who are all you knew, and I just feel so lucky. Maybe it's because I waited and worked through my 20s. It's a positive song, even though I know it sounds sad."

Clarkson has been married to talent manager Brandon Blackstock for five years and the two share daughter River Rose and son Remington Alexander, according to Country Living.

Clarkson's "happily ever after," though, also seems to include a sense of peace and forgiveness with the past. "I've never really been in touch with him," Clarkson explained in 2017 on the European talk show Skavlan, about her sporadic and unsuccessful attempts to nurture a bond with her dad.

With Clarkson's current tour is going through March and USA Today reporting that she will have her own NBC talk show this fall, it's nice to see this performer doing so well and living a great life.

She's such a relatable person, and her music is so honest, I can totally see her killing it in an interview format with her own celebrity guests. Just please, Kelly, be careful next time when you get to the emotional songs. Your tears make me cry, too.